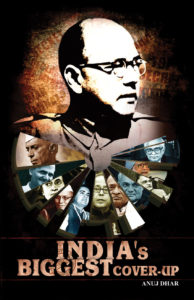 The nation cried on August 21st1945, when the news of Netaji SC Bose’s death reached India. Many believed in the news but a few knew there was something amiss. They would never accept this incident to be true and would make it the purpose of their life to uncover the truth. There were three official commissions setup by the Government of India and many unofficial ones to find out the truth behind this mystery. India’s Biggest Cover-Up is one such attempt by an independent researcher, Anuj Dhar, to bring out the true facts behind Netaji’s disappearance, the reasons and the consequences.

Being a firm believer in the alternate theory that Netaji had not died on 18th August 1945, I must have read this book with a certain amount of bias and my judgement may be clouded. So, I appeal that you have an open mind and read this book till the last page to get the facts straight. While reading this book, at many instances, I myself tried to research for alternate theories and judgements but I must say, Anuj Dhar’s statements are the most convincing of them all. The research is so strong that it is hard to find fault with his inferences.

Many interesting inferences can been made at this point, which will make you re-think about notable congress leaders. The flaws in the observations of Shah Nawaz committee and G.D. Khosla commission are well explained and their motives clearly defined. Dhar also talks about the Mukherjee Commission and its findings, and finally, using many de-classified and still classified documents, he proves that Netaji was not killed that day in the aircraft disaster; in fact there was no air crash that day.

Proving this, the book does not stop. It goes into yet further questions like

“What did Netaji do after the crash?”

“Why did he not return to India?”

India’s Biggest Cover-Up also talks about a few cases of mistaken identities wherein certain look-alikes, like the Shaulamari sadhu, were believed to be Netaji. He disapproves these by the use of contemporary investigation reports of those days. The author firmly believes in the story of Bhagwanji of Faizabad who was believed to be Netaji by many of his close followers. Again, using first-hand accounts of the related people, letters written by Bhagwanji, his discourses to his followers etc., Dhar argues that Bhagwanji was in fact Netaji. Though this may sound a bit far stretched, the arguments put forwards in this book will compel you to have a different outlook.

For instance, while reading about Bhagwanji, I browsed the Internet and found that DNA testing was used to prove that Bhagwanji was not SC Bose and the author had not mentioned anything about it. But just after a few pages, the DNA test was not only mentioned but its entire procedure was explained in detail. Author 1, Reader 0. The author has also tried to narrate what happened to Netaji after his disappearance by using Bhagwanji’s own accounts. All in all, during no time of reading this 500 page book (big pages with small print) did I feel bored or overloaded with information. Kudos to Anuj Dhar for giving India’s Biggest Cover-Up to the society. After all, we all are stakeholders in this and have a right to know about the true fate of India’s favourite son.