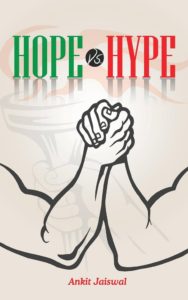 Recently, there has been a surge in the number of political novels written by Indian authors. This is indeed a pleasant change from the regular boy-meets-girl stories which have become rather dull and unappealing these days. Hope Vs Hype by Ankit Jaiswal is a novel which has a very pleasant theme. It talks about a political upheaval in a small town of Uttar Pradesh and the changes it brings with it.

The story of Hope Vs Hype is based in the small town of Swapnanagar in Uttar Pradesh which is on the verge of a new political revolution. Anti-Incumbency wave has swept the town and people are craving for a change after almost a decade of inactivity. The new political equation sees two youngsters – Abhimanyu and Harish come together to make their “Jan Morcha” a formidable force. Though different in their approaches and ideologies, they both wish for the same outcome – a better and developed Swapnanagar.

Thrown into the equation is Pooja, who loves Harish but is desired by Abhimanyu as well. Ignorant of the complex love triangle, Harish and Abhimanyu stand united in their endeavour. But will other parties let them gain political advantage? Will the political stalwarts let the “Morcha” flourish right under their noses? Unknown to the duo, there are forces working against them and maybe it is just a matter of time before things start to fall apart. To know what happens next in this tantalizing tale of ambition and power, read the novel yourself.

The best thing about Hope Vs Hype is its plot. It has the perfect balance of simplicity and complexity. It promises action and fast-paced drama and it delivers just that. I also liked the way the various subplots are woven together. The story is a refreshing one with lots of twists towards the end. The characters are a mediocre bunch though. Pooja is promised as an important character in the blurb but she does not get enough attention in the narrative. The charismatic characters of Harish and Abhimanyu were my favourite amongst the lot. Another notable mention is the character of Dubeyji whose diabolical ways throw in a few shades of grey.

The writing style of the author is pretty decent. I liked the way the story is told as a part of a conversation between two strangers. I also liked the effort with which the author has penned bits of poetry and interspersed it in the narration. The book is written in a simple language without much fuss or excess; which assists in making it an easy read for the reader. There are a few parts which read like monotonous essays but I guess those must have been necessary (to keep) and can be excused.

The only major qualm I had with Hope Vs Hype were a few but very obvious editing mistakes that could have been avoided. I also did not enjoy the typeset of the printing. Narrow margins and small font size are something which I am not very comfortable with.

The climax was quite unpredictable and that was indeed a good thing. But the end seemed rushed and abrupt. I felt cheated (as a reader) of a satisfactory end. A little more time and effort in building up the end would have helped a lot. Overall, the book was a decent read. I loved the story and the characters of Harish and Abhimanyu. I also enjoyed the subtle element of romance which the book had. All of 159 pages, the book can be done in 3-4 hours easily and hence I recommend it to readers who tend to enjoy political fiction.