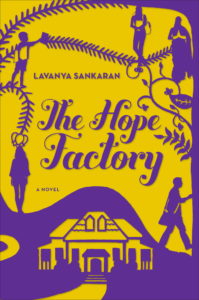 Before I review the The Hope Factory , there is something that I need to admit. I am more inclined towards reading thrillers rather than drama. The reason is that the chances of a character going through social troubles are a lot lesser in thrillers. The focus would be on the story and the suspense keeps you hooked, without having to worry about anything else. The worst that could happen is that a character would get killed, but that would be quick and usually painless.

I have steadfastly refused to read any drama-oriented books, but I did read some, like Rohinton Mistry’s books, as they were given as a gift to me. The books, in themselves, were very good without a doubt. But once again, I had to refrain from going in that direction, as I feel there are enough problems in the real world, and there is no need for them in books as well.

Therefore, you can understand my trepidation when I picked up Lavanya Sankaran’s The Hope Factory. But contrary to my expectations, I was immersed in the story without even realizing it. The story of The Hope Factory revolves around two completely different characters: Anand is a businessman of Cauvery Auto, who is trying to win a bid for a Japanese company’s business, while Kamala is his family maid, who is trying very hard to save money so that she can one day send her 12 year old son to a private school instead of the Government school that he presently goes to.

Anand tries his best to impress the Japanese company representatives so that he can expand his factory. In anticipation of winning the bid, he realizes that he would need to buy more land to be able to accommodate the new orders. He takes help from his friend in finding a land broker, but is afraid to trust him. On the other hand, his father-in-law, in characteristic fashion, tries to bulldoze his attempts by taking matters into his own hands and getting him to meet a top real estate developer, with whom he was already working. But Anand still goes ahead with the land broker rather than his father-in-law’s suggestion, bringing disruptions in his marriage while also having to face political problems. He also begins to get attracted to Kavika, his wife’s friend.

Kamala, on the other hand, has problems of her own that she is trying to solve. While she is happy working for Anand-Saar’s family, as Vidya-ma, while hard to please, was fair, she was worried about her son and his education. Being a very smart kid, she felt a good education would help him do jobs that required computers, which, in her opinion, was the sign of success. But then, she faces trouble herself and has to vacate the house she’s staying in because her land lord wants to sell it to the real estate agents.

Ms. Sanakaran has done a wonderful job in portraying all the characters, especially both the protagonists. I especially liked the way in which the author has tried to maintain continuity while switching from one story to another, and doing it in a very natural way. Another important thing about the story is that there is no single character that you would hate in the entire story (well, perhaps, except for Harry Chinnappa!). You will root for both the protagonists and would want the story to end happily-ever-after. The language used is also simple, which makes it all the more easy to immerse yourself in the story and actually connect with the story, which, often times, is not the case in many other books.

Surprisingly, I couldn’t point to any single flaw in The Hope Factory. It is either because the book and the story are really flawless or that I was engrossed in the story so much that I did not notice any. Whichever may be the case, it is just another plus for this book, as I am normally critical and quick to find errors.