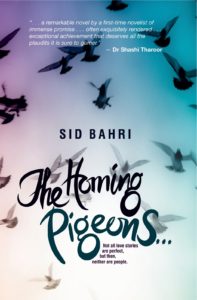 The Homing Pigeons is a debut novel by an ex hotelier-turned-banker-turned-outsourcing professional-turned-author Sid Bahri.

The author attempts at narrating a “larger-than-life love story” and not just another love story or a “me-too story”, and I must say that Sid does a fairly good job of it.

The story leaves you hooked until the end for it will make you experience love in the most emotional and unconventional way.

It tells you that love exists, and not just in “happy ever after” situations but in adversities as well.

Radhika is a recently widowed woman in her early thirties who is just getting done with her step daughter’s wedding, whom she detests to the core and though the feelings are a bit overdone, they are mutual. Radhika looks forward to her freedom which can only come after the wedding as stipulated by the will that his ageing husband has left.

While Radhika dreams on about her freedom, she does not realize that it will not be as exciting and delightful as she has anticipated it to be.

Aditya, on the other hand is a jobless wanderer buckled down by a steeply dropping bank balance and an on-the-verge-of-failure marriage.

Having lost all hopes of landing a job and finding happiness, Aditya finds his refuge in drinking and continues to spend his evening getting wasted at bars.

Little does he know that it is in such a bar that he will chance upon Divya, after which his life will never be the same.

Radhika and Aditya narrate their story, and as they start with their respective stories the reader would never imagine that the two entirely different stories are somehow connected and are just pieces of a jigsaw puzzle which will eventually fall in place completing the whole picture.

Sid Bahri is definitely a promising author and writes in a very emotional and gradual fashion which I believe is lost somewhere in today’s fast-paced novels.

The characters of Aditya and Radhika are beautifully chiselled and there is a depth to the characters.

Also, noticeable is the fact that the author has not fallen prey to often-unnecessary subplots characters and has stuck to the main theme. This I believe is a great achievement.

The book is a bit predictable in the end and I had guessed the climax very early. Also, the title though remarkably well thought gives away to the ending.

At the end of this book review, I would say that Sid has done a fairly good job and sincerely hope that with some minor improvements and time, his writing will mature further.

This is a surely a “look forward to” novel for readers who have a taste for “emotional writing” and “deep insightful characters”.

Guys, if you are there and reading this, I must tell you that this book coming recommended from Dr. Shashi Tharoor himself; is definitely worth your time and money.