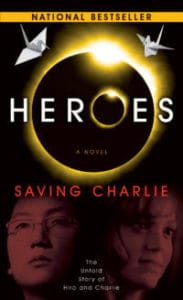 “Heroes: Saving Charlie” is a novel written by Aury Wallington which is based on the famous TV series – Heroes. I picked this book with great enthusiasm as I used to enjoy the show a great deal and thought it would be a good read. One major parameter on which I wanted to test this book was – “Will it be a good read for people who haven’t seen the serial?” and I must say that in that department Aury Wallington has fared fairly well. She has written the story in such a way as to give a full story in itself and at the same time leaving a few elements covered in suspense so that the readers will be interested in checking out the serial for further knowledge. So, for those of you who have no idea about the TV series “Heroes”, worry not, because this book will still give you a good read and a good story.  Your reading experience won’t be compromised for the lack of prior knowledge of the show and its characters.

The story starts when Hiro Nakamura is sitting in the Japanese headquarters of his father’s company and suddenly he discovers that he has a special power – He can stop time. Soon he learns that he can also bend time and teleport through space and time continuum. With all these super powers, he discovers that something terrible is going to happen to the world and he has a role to play in saving it. His search for his destiny leads him to America where he meets Charlie in a road side diner. Talking to her for some time, he realizes that Charlie too has special powers – A photographic memory. He instantly falls for this pretty and chirpy girl and waits to further his conversation with her after her work at the diner, but before he can know more about her, she is murdered brutally. Where once was her head, now is a hollow cavity; the upper part of which contained the brain, is now gone. Hiro realizes that Charlie has a connection to his destiny and that he has to go back in time and save her from that “Brain Man”.

Will he be able to save Charlie?

Will he discover his destiny?

Will he solve the mystery of the Brain Man?

Was Charlie killed because of her special powers?

Well, you will have to read the book for the answers.

Spoiler alert: Non-followers of the TV series may find the climax a bit disappointing.

Now coming to those of you who have seen the serial and know all about it. This book will give you a deep insight into the character of Charlie. You will know her better; know how absolutely adorable and lovely she is and in the end you would come to regret the fact that she was shown so less in the serial. Moving to the negatives, one major disappointment I had was with the way the character of Hiro was portrayed here. We all know that Hiro has his own positives and charms, but here in this book Aury has failed to focus on those charms and the Hiro she shows is just another big time loser and a man with no spine. This is the biggest let-down of the book. Overall, I would say the book is decent and a one-time read.