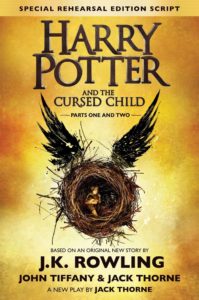 After so many years, Harry Potter fans had something to look forward to in “Harry Potter and the Cursed Child” – a new adventure, a new thrill, a brand new story but alas, we never get what we hope for. In the cursed child, the main culprits are the flawed plot, impractical play format and the already high expectations that we had set for a Harry Potter book. Such a format can never go down well with any novel least of all with the Harry Potter. The magic of Harry Potter lies in J.K. Rowling’s fantastic writing skills and her story needs descriptions; it needs elaborate storytelling and not just dialogues. A play can never achieve what a novel can and maybe the vice versa is also true but in this case, we are talking about individuals who grew up with Harry Potter, who found joy in his joys and fear in his fears; we are talking of those extraordinary moments when they felt they too lived in the world of Hogwarts and Magic; and how was that achieved? – Through J.K Rowling’s extraordinary writing skills.

To tamper with something so pure and fantastic was surely going to hit back and that it what has happened with the cursed child. Even with a seemingly weak plot as compared to other Harry Potter novels this one could have done way better if not for the format and the constraint of space. I still believe that if J.K. Rowling decides to churn out a novel based on this book, she would do a wonderful job at it. There are some loopholes in the plot of “Harry Potter and the Cursed Child” (which any Harry Potter enthusiast could easily point out and which I would skip mentioning here for the sake of avoiding spoilers) but that can be easily shrouded with Rowling’s flawless writing.

I personally enjoyed all the characters – it was good to know Harry, Ron, Hermione, Ginny and even Draco in their current lives. I personally liked the characters of Scorpius and Albus Severus, though I think there should have been a little more attention on Albus’s childhood. He has been given a very fleeting childhood in the book and that didn’t seem much fun. The charm of the Harry Potter series lies in its child characters and at the centre of it is the life at Hogwarts. To take that away or to reduce it to a nothing is to take away all the fun. Scorpius emerged as a strong character too and I would have loved to know him better too, but that was just impossible with the help of only dialogues.

The story moved really fast in the 330 pages that it was given and one could feel that the things were being rushed. Even Voldemort wasn’t that scary at such a fast pace. Give the same plot, the same story a few hundred more pages and you have a good book in hand. The climax was also not that appealing again because of the hurried pace. But enough of my ranting, I can assure you that even after all this ranting of mine, somewhere deep down I admired the book. It brought me closer to my childhood and it will make you reminisce the good old days too.

I end this review here and give “Harry Potter and the Cursed Child” four and a half out of five stars in general. Do I recommend it to my readers? Yes, of course, I do. Who doesn’t recommend Harry Potter?