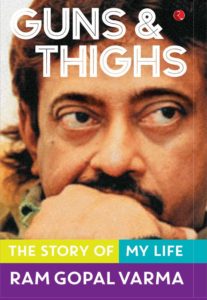 The film industry is full of all sorts of characters – some are revered and some are frowned upon. While we know why some characters ( the likes of Big B, Om Puri etc) are revered, often we do not know the real reason why some stars are frowned upon. This is because we are often influenced by what the media has to say and rarely do we get to know the stars up close. In “Guns and Thighs: The Story of my Life”, Ram Gopal Varma, a highly successful director of the Bollywood and Tollywood film fraternity, reflects on his life and achievements and tries to make the readers know him better.

Now I know that Varma is not the ideal role model a parent will have his child follow but if you are patient as a reader and perceptive to his words, you will know that maybe this guy is not such a badass at all. There is brilliance in his creations and creativity in his articulations. This is the guy who has redefined the mafiosos of the Bollywood and Tollywood alike and this is the guy whose success story from rags to riches is for all to follow and take inspiration from.

“Guns and Thighs” is divided into six parts which are further divided into numerous chapters. Now, this may seem like a never ending saga or an epic but fortunately, it is not and all of 199 pages, the book is as easy as a read can be, doable in just over 5 hours. The main parts into which the book is divided are – (1) Everybody is a Nobody: Success is a Chance, (2) My Gods, (3) Take 1: On Films, (4) Take 2: On Life, (5) My Films and last but not the least (6) Critics/Media: Why I Love-Hate Them.

I liked the book in parts. For instance, I simply loved the 1st and 2nd part but not the 3rd. I also liked the 4th and 6th part but not the 5th. The 3rd and 5th parts were unknown territories for me as they talked about filmmaking in general and Tollywood movies which I am rather uninitiated into. The parts where the familiar Bollywood movies like Sarkar, Satya, Aag cropped up were undoubtedly the best.

My favourite parts of the book were where Varma discusses his personal life and his Gods. I simply liked them the best. He writes candidly and often confesses to his own failures and shortcomings. There is also a lot of Masala for the gossip-loving readers (yes, even I tend to be one of them). All in all, “Guns and Thighs” is a good read and thus my recommendation is obvious. My final verdict on it will be four out of five stars.