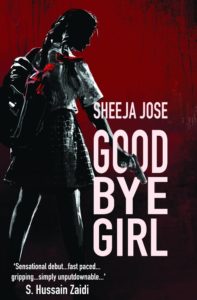 “I am going to open a real-world, scarier than fiction.”

Justice is a strange concept, a concept which differentiates the right from wrong, the innocent from the guilty.

Lady Justice is generally shown with a blindfold which represents objectivity, in that justice is or should be meted out objectively, without fear or favour, regardless of identity, personal wealth, power, or weakness; blind justice and impartiality.

The brutal violation of the above-mentioned code of justice is the crux of everything that happens in the novel “Goodbye girl”.

Goodbye Girl is the story of how a 15-year-old girl is turned from an innocent victim of a vicious hate crime to a notorious, mass-murderer, she comes back from the dead like a phoenix and seeks out all who made her life a living hell.

It’s a gripping story about a girl who would go to any limits to bring to justice people who are beyond the grip of the law.

The narrative of the novel is very interesting, as the author easily maintains her flow of events and manages to keep the reader waiting for more.

To put the novel in far simpler terms it’s like “The lighter version of Marquis de Sade” meets “Stieg Larson”.

The book is well written, I really liked the way that the title of every chapter has been specifically named as a piece of wise advice as if trying to make more sense out of life.

Every time the action picked up in this book, I had a serious adrenaline rush. My heart raced, my eyes frantically read line after line, and my hands automatically went to my mouth.

I was totally engrossed in the story Sheeja had to tell, I tried to envision the story from a girl’s perspective *I failed miserably on that end* and in spite of my best effort to put my mind and time to other chores.

I finished the book in 2 seating’s which, considering my JK Rowling or Dan Brown stint, is not a record-breaker but still pretty good for a new author working on a revenge themed novel.

I even enjoyed the general mechanics of this book. I liked the short chapters that kept me coming back for more.

They made it easy to fly through the pages. I would look down maybe after a half hour or so into reading and be 150 pages further in the book.

The “dun-dun” moments at the end of pretty much each chapter had me flipping, too, even though I could understand how some might find that worthy of an eye-roll or two.

I liked the part where careful details have been exquisitely pointed out about the ongoing in the protagonist’s life, her transformation from a girl to a woman, and then on to a world-class assassin.

While reading Goodbye Girl, I felt let down in case of two things. The first being the climax. To put it precisely it was a bit clichéd.

Secondly, the even though the writing style is great but at some points, it felt as if I’ve missed something like at the end it just felt like the author was kind off in a rush to finish off her work.

As a reader, it felt a bit disoriented sometimes, a bit more detail would have made it a perfect revenge novel.