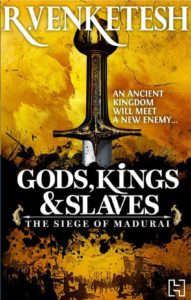 Off late, there has been an explosion of books based on romance, be it the college variety or the grown-up version. But at the same time, historical fiction has been making its presence felt too, with more and more authors taking up the stories that the new generation may not have heard of. Everyone knows about The Shiva Trilogy that made huge waves and recently I read The Aryavarta Chronicles by Krishna Udayasankar. Both the series were very enjoyable while giving a fantastic insight into what might have actually happened back then.

Therefore, when I started reading R. Venketesh’s Gods, Kings & Slaves, I did so with high hopes that it will have the same effect as the aforementioned books. And Mr. Venketesh did not disappoint. It is a fantastic re-telling of the time the Pandyans ruled Madurai and the conflict between the Delhi Sultanate and the Pandyan Empire. The narration was spot on and the characters were developed with great care, leaving a sense of content for the reader that can only come from reading a really good book.

Gods, Kings & Slaves revolves around Crown Prince Veera Pandyan, who is set to ascend the throne at Madurai, a city that is known for its riches, so much so that it was believed that it was perhaps the richest city in the entire sub-continent. Naturally, other rulers were interested in getting their hands on the fortune, and one Malik Kafur, trusted general of the Delhi Sultan Alauddin Khilji, sets his sights on pillaging the temples in the city off their wealth. With Kafur never being defeated before, the war is bound to be brutal and Veera Pandyan, having already to deal with other enemy forces, has another deadly enemy to defend against.

Frankly speaking, I wasn’t aware of the story behind the conflict apart from what I have read in the history books, which in itself is not much. But Venketesh does a fabulous job in making sure that the reader is completely interested in the story. Almost always, the major challenge in a historical fiction is to ensure that the deluge of characters are presented in such a way that the reader does not get confused and loses the thread, which is exactly what the author has made sure in this book. While there are quite a few characters to keep track, Chand Ram was a character I really liked. Nowhere would you feel lost as each event is tied neatly with the overall sequence of events.

While this may be Venketesh’s first foray into writing in English, it is clear that his works in Tamil have certainly given him the experience of telling a good story. Gods, Kings & Slaves does not disappoint, and irrespective of whether you are interested in South Indian history or not, this is a book that you must not miss.