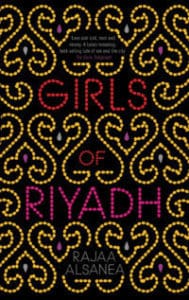 As mysterious and glamorous as it sounds, “Girls of Riyadh” is a far cry from what the name suggests, and that holds true at least for me as an Indian reader.

I believe it to be a lot more scandalous in the eyes of a normal Middle Eastern reader, after all, it wasn’t for nothing that this book was banned in the Middle East and had to be black-marketed before it became a best seller in the Arab world.

I picked this book from a street shop in Trivandrum, near the airport where I decided to stroll around to kill some time before boarding my flight from Trivandrum to Bangalore.

Honestly speaking, I picked this book based solely on the cover and the title, because I was in the mood for a chick-lit book.

The story of “Girls of Riyadh” revolves around 4 liberal and wishfully independent girls who are trapped in the Saudi society, each weighed down by her heartbreak and issues with the society.

Each has her problems with guys, issues at home; each wants to break free and live independently but in the end, settles with a trade-off between what she desires and what her family desires for her.

The narrative style of “Girls of Riyadh” is really interesting, as the author starts sending emails to a random group of people, talking about the lives of four of her real best friends.

The whole book is a compilation of these emails and what gets specifically interesting is the fact that at the end of each email (chapter) you are left to think, which of the 4 friends mentioned the author is.

At the start of all these emails, the author also responds to the emails she receives as feedback from her readers.

The responses are sometimes interesting and add a little masala to the chapters because of some out-of-the-blue accusations and questions which they are full of.

For instance, one girl said that the author was telling her story and accused her of plotting to bring disgrace to her family. She said that she knew who the author was and even threatened her.

Overall, “Girls of Riyadh” is a good read because it gives us an insight into the lives of girls of the Middle East.

With their burqas and abayas and their Middle Eastern customs, life is definitely not a cakewalk for them.

The plot is good and the story is good too with only the end being a little abrupt and giving the impression of being written off in haste.