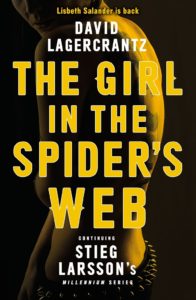 We all remember what a pleasure it was to get to know the fascinating and intriguing world of Lisbeth Salander and Mikael Blomkvist.

But after the unexpected demise of the character’s legendary creator, we were left aching and very much hungry for more.

The good news came when it was announced that the millennium series will carry on and Stieg’s legacy will continue to thrive but this time through the pen of David Lagercrantz – a distinguished Swedish author of literary works.

So here it is, one of the most awaited books of this year and all I have got to say about it can be summed up in one simple word – perfect!

The Girl In The Spider’s Web takes us to Lisbeth Salander who has once again has started to avoid Blomkvist and hasn’t contacted him in many months.

The story starts with a Swedish scientist Frans Balder approaching Blomkvist regarding a big secret that he has been harbouring.

It has something to do with revolutionary research in the field of artificial intelligence and technological singularity which he has been working on and parts of which seems to have been stolen by the ugly nexus of corporates, politicians and mafia.

He feels threatened and is scared for his son’s safety – a small boy of six who is a savant and a genius.

But before Balder can open up to Blomkvist, he is brutally murdered with his laptop and mobile phone stolen by the murderer.

The story takes a new turn when Blomkvist discovers that Balder had contacted Salander to go through his systems and securities to figure out whether or not he had been hacked.

Salander’s involvement amuses Blomkvist as she is not the one to do odd jobs and go fiddling with people’s petty business unless it is also a part of her long term agenda.

As Mikael starts digging he soon realizes that Salander just like Frans Balder is being targeted by a group of notorious and ruthless cyber gangsters who will leave no stone unturned to bring her down.

So who are the spiders? What do they want from Salander? Why did they kill Balder? Will Mikael ever get to the bottom of the truth?

To know this and much more about these new turn of events in the life of Lisbeth and Blomkvist, read this exciting new adventure thriller today!

The best things about The Girl In The Spider’s Web are its characters and its plot.

The plot is simply amazing connecting old enemies, Lisbeth’s past, Balder’s research and beautifully putting it all together in the end.

The subplots, though many, gorgeously complement the main plot and stun the reader to no end.

My favourite character in this part turned out to be Camilla; there was something menacingly ominous and seductive about her that kept me hooked on to her.

I definitely wish to see more of her in the coming novels. The climax too was sensational and perfectly balanced between good and evil. I loved it to no end.

All in all, The Girl In The Spider’s Web was a pleasurable read and I definitely recommend it to all my readers with a warning sign stating – “You seriously can’t afford to miss this one.”