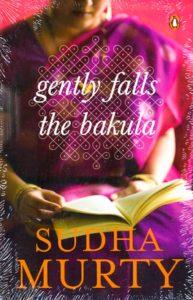 Gently Falls the Bakula is a classic Sudha Murty novel. It has a simple story which is told in a way that makes the reader fall in love with the characters and makes him glued to the book right till the end. This has always been the case with me whenever I find a Sudha Murty book in my hand. Her stories are always rather plain but what attracts me to them is the depth of her characters and the complexities of their relationships. The same was true for Dollar Bahu, and the same can be said for Gently Falls the Bakula too.

Gently falls the Bakula is the story of Shrikant and Shrimati who belong to two hostile communities. Shrikant is intelligent and smart but Shrimati is the smarter one and slowly as the two get to know each other, they fall in love. But despite the disagreements from their family, they get married and shift to Mumbai for Shrikant’s job. Shrimati having found her Shrikant decides to give up her career to make way for her husband’s progress but what she does not realize is that in doing so peace and happiness will always elude her. Much later, an encounter with her old professor results in Shrimati analyzing her life and questioning her choices.

“Ugly ducklings often turn into beautiful swans when they are tested.”

The story is simple, follows a single plot and focuses on the two main characters only. It will not be incorrect to say that the book is mainly about Shrimati, her life, her choice and her decisions than about Shrikant. Shrimati is an epitome of sacrifice and becomes the face of many Indian women who have, without a moment of hesitation, given up their dreams for the sake of their husbands’.

The best thing about the book is its character depiction. Shrimati who is such an extraordinary young woman is dragged into the mundane life of a housewife after her marriage. She who willingly gives up her dreams is deprived of any other happiness by the one whom she sacrificed everything for. Her plight reflects the plight of many young women and it is this close association with reality which makes the book such an extraordinary read.

Sudha Murty’s writing hits home where many of us have seen this happening in and around us. The beauty of her writing lies in its simplicity and in her ability to bring her characters to life. The passion with which she writes about the places and the culture (of her characters) serves as a reflection of her own love for her culture. In this book, the way she uses the Bakula flower to convey such intense emotions is nothing if not beautiful. She transforms Bakula into Shrimati and Shrimati into Bakula with such ease and finesse that it is really difficult to imagine any other title for this book.

The climax is ordinary and comes as no surprise. Well before the end of the book, I had an inkling of what the conclusion might be like. But again, dramas, as intense as this one is rarely about the endings. The entertainment quotient was high enough for me to recommend this book to people who like dramas and general fiction. I conclude this review by rating the book three and a half out of five stars.