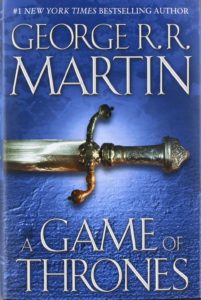 “When you play a game of thrones you win or you die.”

There are very few books which deserve to be acknowledged in the category of “Epics” and Game of Thrones is certainly one of them. The first book in the series “Song of Ice and Fire” was released in the early 1996. But the whole series, along with George R. R. Martin, (who has been very active in the fantasy genre since early 80’s) gained huge fame only with the airing of the hit HBO TV series titled the same as the first book – Game of Thrones.

I have been following the series since its start, especially because a friend of mine described it as “The Sopranos (HBO series)” meets “Lord of the Rings (JRR Tolkien’s)” and being a huge fan of both, I absolutely had to. There are five novels in this series so far and two more are expected to be written. Martin has said that his ambition was to create an imaginary world with the atmosphere of the Wars of the Roses.

Coming to the plot, a small number of aristocratic families are contending for power on the kingdom of Westeros, an island with a varied topology – a cold north, a warm south, and ferocious barbarians across the seas to the east. The families are interlinked by marriages and alliances, but remain strongly distinct in ethos. The Starks are the heroes; the family at the heart of the story. They are northerners; hard people adapted to a hard life, preoccupied by honor. The Lannisters are their enemies and opposites – rich, ruthless, amoral southerners – barely able to conceal their wish to take over the kingship.

As for the king, at the start of the books it is Robert Baratheon, the huge bruiser, who, with help from the Starks, deposed the previous king 17 years before the story begins. That monarch, mad King Aerys, was the last Targaryen on the throne; the Targaryen dynasty rode to power in Westeros hundreds of years ago on the backs of dragons, practiced brother-sister incest, and gradually went mad. But the dragons are long dead; none has been seen for hundreds of years and the two last Targaryens, the only family members to survive Robert’s attempt to eradicate them all, are near-children, fled into exile over the seas.

This series has a lot to offer to readers of every genre in spite of it being a typical fantasy novel. The characters of A Game of Thrones are so well written and have been so well established that you can actually feel they are being built up for some sort of a bigger climax, but you would be amazed at the total amounts of deaths that are there. Many political plotting and conspiracies go on in the plot and they keep you wide awake until you’ve known the end.

A Game of Thrones tells its story by hopping about from person to person across the wide geography of “Westeros” and beyond, with the point of view moving around a large number of principal characters and most of them, for most of the time, are afraid for their lives. The violence in this milieu is not Tolkienian sword-fighting between warriors and orcs; it is about the murder of innocents. It’s not a world any sane person would want to live in, not for a moment; which is another respect in which it manages to resemble the real “Middle Ages”.

Final Word – Many of you might have already seen the TV series and might be wondering
“What’s in it for me?” “I know every climax.” etc. But you got to trust me when I say, “This book, in fact the whole series deserves a read”. George RR Martin will amaze you; he’s got a captivating style like no other.