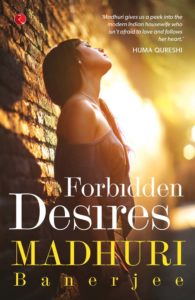 In the recent times, marriages have become a tricky affair in India. There is no more a sense of security in one’s marriage as it used to be in our parent’s generation. Today’s marriages are fragile; breakable. Add to it the fact that most of our times are now spent in offices than in the home, marriages today have become more like an unused treadmill. Working, but not running. Madhuri Banerjee’s “Forbidden Desires” looks at marriages in today’s fast paced world and at how they change given slightest of changes in our lives. This is the story of four women – Naina, Ayesha, Kavita and Kaajal and their tryst with relationships.

I have read Madhuri Banerjee’s works before but this one was quite surprising. She has matured from an amateur to a writer with talent and creativity. She has definitely upped her game and honed her skills. “Forbidden Desires” is a mix of various plots, each one dedicated to the woman in question. They lead separate lives and separate relationships but how the author connects all of their individual stories, in the end, is beautiful and tactful. Then there is all that “Masala” which makes a typical novel become a bestseller – there is love, lust, sex, gossip, scandals, drama and emotions; all of these mixed together becomes a definite bestselling concoction.

I loved the characters – no need to name them because I loved most of them and mind you there are many. I loved them for their energy, vigour, for their ambition, and mostly for their need to make most out of their lives. Almost the entire book is woman-centric (yes, with all four main characters being women, what else it can be?) and to an extent pro-woman. But even though the story revolves around women, the book cannot be hailed as a chick lit or romance. There are bit of those elements but only on the surface, its core is drama; pure drama.

The writing style is fast-paced and gripping. The book is mainly divided into two parts – the first part has, in turn, four subparts which talk about each character’s individual story whereas the second part is where the intersection of their story happens. This is also the beginning of the climax.

Now there are many well-written books but in my experience as an avid book reader, most books fail in the climax part and that is where this book has passed with flying colours. The climax is simply awesome and absolutely unpredictable. Until the last page I had not been able to guess it and when I read what I did, I was pleasantly surprised. The book wins in entertainment quotient too. It has all the ingredients in the right doses to create a ravishing and enthralling read. I thus rate the book three and a half out of five stars and recommend it to all women readers (somehow I feel that men will not like what they read).