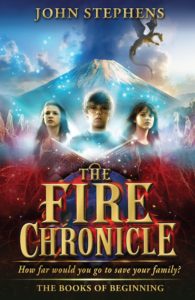 Fantasy fiction is a tricky thing to write. Not only does it require imagination on the part of the author, he/she should also be able to translate it onto paper effectively so that the readers will be able to imagine the same thing. Otherwise, the story would not come out well and the reader will not enjoy the book at all. While some may not like fantasy novels, I find that they have the capacity to let you escape from the chains of reality and make you believe, at least for the time that you are reading the book that magical things can happen.

The Fire Chronicle is Part 2 of ‘The Books of Beginning’ series by John Stephens. Considering that I hadn’t read part 1, ‘The Emerald Atlas’, I was apprehensive whether I would be able to successfully follow the plot and if it would affect the way I would perceive the book in the end. However, my fears were laid to rest once I started reading the book as there were enough references in the beginning itself for me to get an idea as to what transpired in Book 1.

The story is about 3 kids who are on a quest to find 3 magical books, known as the Books of Beginning. They are aided in this quest by Dr. Pymm, who’s a renowned wizard. Part 1 was mainly about the elder sister Kate getting hold of the first book, while the Fire Chronicle is about Michael, the second sibling, becoming the keeper of the second book, The Fire Chronicle. At the beginning, Kate is separated from Michael and Emma as she uses the book of Atlas to go back into the past, but is unfortunately unable to get back to the present. The other 2 siblings are helped by Dr. Pymm in gaining access to the second book, but that does not happen very easily, what with having to face a dragon being the least of their worries.

The Fire Chronicle is intended for young adults, but can be enjoyed by adults as well even though some of the sequences may not be palatable to a mature mind in that it appears childish. But the intended audience of the book would surely enjoy it and eagerly wait for book 3 in this trilogy. All the events and places are illustrated in good detail and there are enough magical things to keep the reader interested in the book, and the plot as well. In fact, the ending is more serious than what you would expect in a children’s book.

Having said that, one but can’t ignore all the similarities to Harry Potter with this series. The protagonists separated from their parents, an old and wise wizard helping them out, and them having a safe house every time they need to get away. But that’s where the similarities end, with the plot completely different from any of the Potter stories. Of course, there is the villain who is supposed to be super-evil and waiting to rise back up again!