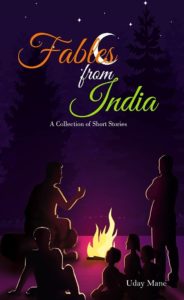 They are very much like a time machine, they can take you to places in no time.

Whereas you have to invest a couple of hours in a novel, a short story has no such requirement. It promises magic and if written well, delivers it too.

I received “Fables from India” from Flipkart under their book review program.

There was something which drew me to the exciting title even when the cover was too dull for my taste and hence the title alone got me excited enough to request a copy.

“Fables from India” is a collection of 22 Tales and a poem at the beginning.

All the stories pertain to a fictional India of a distant past. They are about kings, princes, and kingdoms and also about magic, hope, and morals.

The best chapter in the book is the poem titled “What Do I Seek?”, which is a very accurate representation of a man’s mundane life. The poem has a deep meaning and an ability to leave a profound impression on the reader.

Out of the 22 tales, which make the rest of the book, some are really amusing while a few are just plain dull.

Sometimes the stories touch you as a reader while at other times they are simply bland.

The best stories are cleverly placed in the first half of the book, which is a good move as it makes the reader go on.

A few of my favourite stories in the book are The Prince of Aramadia, The Farmer and the Magic Objects, A Night for the Demon and Making of a King.

If I have to name a single favourite, that will be “The Farmer and the Magic Objects” because it reads like one of those grandma’s bedtime stories which I was so fond of in my childhood days.

The story has a definite charm and some really good moral values to learn from.

The worst story, in my opinion, will be “The Jungle Laws” because it does not feel like a story at all. It reads like a drag lecture which is cliché and unappealing for my taste.

Some of the characters in the stories which I liked, appealed and spoke to me.

Given the brevity of short stories, there is hardly any time for character development but even then, certain characters grew on me.

The best thing about “Fables from India” was its theme – legends and fables from an ancient past.

It is this theme that makes the book so close to a grandma’s collection of tales and which makes the reader reminisce about her childhood days.

I will like to conclude this review by asserting that the author has potential and if he continues to write further, his writing is bound to become mature and flavoursome.

Buy your copy from the links below.