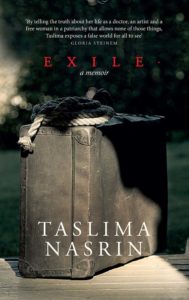 Taslima Nasreen is a household name in India. The Bangladeshi author has been always in news no matter what. She is a brave soul; in spite of all the “fatwas” in her name and the “bounties” on her head, she continues to raise her voice to fight against a patriarchal world which subdues women. Taslima has written her autobiography in various parts. Exile: A Memoir is the 7th part of her autobiography and deals with the phase of her life in which she was exiled from her own beloved India.

Taslima who had been living in exile since 1994 when she had to flee from her native country Bangladesh, was again exiled from India in 2008. In 2004, after having lived for more than 10 years in America and Europe, Taslima was granted a temporary residence permit for India. She came to Kolkata then and established a house there. It is this shift from Sweden in Europe in 2004, which marks the starting point of Exile: A Memoir.

Taslima writes about the joy which she felt while living in Kolkata. For her, she is a Bengali and living in Bengal on either side of the border is equivalent to home. Kolkata made her re-establish the long-lost connect with her roots and thus her life became carefree. She loved Kolkata and its people but she did not know that it was just a temporary phase of her life, that she will never be able to call Kolkata her permanent home.

Soon afterwards, during the inauguration of a Telugu translation of one of her books in Hyderabad, Taslima was attacked by a radical group. On her return to Kolkata, things got out of control and she had to be taken to Jaipur. One thing led to the other and finally, she left her beloved India in 2008. This is where Exile: A Memoir ends thus mainly talking about her period of stay in India and the events and the politics which ultimately led to her leaving India for good.

Taslima writes with utmost candidness and has not shied away from any details – good or bad. While talking about her books and critics she has incorporated both good and bad critics. Interspersed with her writing all throughout the book are various pieces of articles which had appeared in magazines, newspapers and as such, which talk about Nasreen or the events relevant to Exile: A Memoir. This though informative makes the book a little lengthy, dull and monotonous. If only this part could have been trimmed, the book would have been much more interesting from the point of view of a reader.

The 330+ pages of Exile: A Memoir only seems bearable because the readers know that it has been penned by Taslima and not some rogue writer out there to tell his story. All in all, the book is an okay one time read, nothing which cannot be missed and mostly skippable in parts (the so-called articles being the most boring elements).

Watch the YouTube review of Exile: A Memoir below: