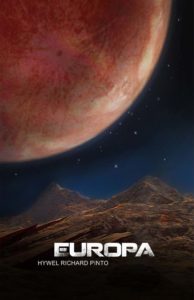 Europa opens with a tantalising scene of Captain Sparks, completely consumed by lust, finds himself in the mouth of the most feared fictional creature of outer space- the Ulugu. Set in the year 2250, Captain Sparks is getting ready to be the star of his own trial. Relieved at being woken up from the Ulugu nightmare, Richard Sparks is introduced as a 42-year old who’s fitness regime keeps him looking too young for his age. He works with the top-notch Milford Bales. He is picked and chosen to be the Captain of Silver Fleet ship on a particular undisclosed mission. Set in a futuristic time and location, the themes of pluralism, post globality and mixed race are brought out by a tabular listing of crew members who are from various European and Asian nations.

Mario Grant is a pilot with ample experience flying bomber aircrafts in some of the worst conditions of the world. He works with The Space Exploration of the United States of America (SEUSA). Poor personal connections at SEUSA do not allow him to climb up the ladder of progress in his career. He is only sent on small unimportant missions and at best as a third officer to the Moon. A deal with Thompson Boer lands him a mission to Europe.

Each chapter of Europa constantly alternates between the developments of the two captains Mario Grant and Richard Sparks who are both on board Silver Fleet but are unaware of each other as they have all been travelling in an unconscious sleep-like state to outer space. All the chapters have an atomic energy ring structure within the centre of which the chapter numbers are written like a nucleus. The narrative is highly descriptive with insider images of the futuristic spaceship with its sleeping pods, large telescreens and auto-pilot that is slowly becoming the future of aviation and travel by air on the whole.

Rubin Draco inherits Draco Industries from his father and at a tender age of 20, he makes his first major foray into expansion through the sale of manholes. The narrative constantly moves to and fro from the past to the present and into the future again. It is confusing and requires the reader to remember a lot of obscure information about fictional worlds that may be easier to conceive for fans of Star Trek, Star Wars, post-apocalyptic or other such dystopian fiction. The information is scattered discreetly and in no fixed pattern. So even when things get difficult, skimming through will only make matters worse as missing vital information will lead to a vague storyline. This sort of mechanistic future is assumed to be the present in which Captain Sparks, the other characters and humankind at large live in.

The rift in the team begins when Captain Sparks is accused of negligence on board during a mission to one of Jupiter’s moons – Europa leading to the death of three crew members. The constant shifts from the past to future, to a few days before the flight, the launch of the shuttle, on board the spaceship and so on are too frequent. All the dimensions of time and space are thwarted to replace it with a newer immensely mobile temporality. Such a large project of an international scale has several political scams going on in the background. Amidst this turmoil are the lives of those on board who are away from friends and family, having to sleep in pods and worry about running out of supplies in any unwelcome case of contamination.

As it is with any multimillion dollar project there are many long-term goals at stake as well as several rivals. Plots are beings hatched to murder and kill as the team prepares for a risky landing on Europa. The moment of landing, receiving the first pictures and experimenting with the landscape of Europa is dazzling. It is long-awaited both by the crew and the reader and the moment is well lived. What they spot on the surface is Earth-like holds that one will find on mountainous terrains on Earth. The camera zooms in and pans the surface to reaffirm to Captain Sparks that they are not the only living beings still alive on Europa. The excitement of finding life on Europa is also the ultimate aim of the expedition (as it is with several recent projects like NASA’s Kepler Space Craft or other time capsules).

The fast pace of the narrative may be enticing but also exhaustive if readers fail to keep up. The constant to-and-fro movement in time and space is stressful on the reader’s memory. The book is loaded with technical information especially relating to aviation like details about ducts, pipes, engines and shuttles which is difficult for the layman to follow. Things are disclosed only when one goes deeper into the narrative. The story is full of rapid twists and turns and hard to guess. Several shocking revelations show that the characters are multiple passport holders, some turn out to be spies while others have murky sexual lives. Though overwhelming and episodic, it has a lot of material to be a great plot for a graphic novel or sci-fi 3D movie.

An important character that shapes the better part of the second half of the story is the leader of the mafia, Thomas Boer, who is sinister to the bones and has informants within SEUSA. This is enough knowledge for Jewel to break into his upscale Greentown apartment to find more evidence about who those informants exactly are. Though the plot revolves around Captain Sparks and regards the challenges of leadership that someone holding his position has to face but Jewel as a corresponding but subordinate figure complements the Captain by pulling off some of the most vital tricks of the plot. She cleverly plants voice activated and slow dissolving electronic bugs.

It is the meeting with Flower and her father King that things take a very different turn. They describe their home on their planet Ganymede which transports the reader back to the opening chapter of Sparks’ encounter with the Ulugu. Flower cooks up many stories of her innocence and befriends the crew members who are unable to see beyond her crocodile tears. They must get rid of her manipulative and mind-controlling ways of psychologically programming those around her if they wish to complete the voyage.

Pinto has a great taste for multilateralism but the locales mentioned are not just downplayed. They have not been used at all. The places do not live up to their actual reputation. Pinto does not exploit the geographical locations to the extent that they could have been. Similar to Pinto’s Ice Bound, the characters are mainly based in Ontario, Canada. One can only ponder over all the adventurous episodes that could have been created out of the ice-capped Northern polar region, the historical monuments at every other turn in Delhi and the adventurer’s paradise that the United Arab Emirates is. A skydive from the current tallest building in the world in Dubai, snorkelling in the coral reefs of the Arabian Sea, another Tom Cruise like Mission Impossible: Ghost Protocol sprint or a Vin Diesel high dive from Etihad Towers as in Fast and Furious 7 would have added so much more momentum to the plot. Also, though an international space project, there is little mention of the far South East Asian nations keeping in mind that the global gadget, automobile and technological manufacturing giants remain concerted in China, Japan and Korea. Since the story is set almost four decades in the future Pinto mentions that it is safe to assume that these places will have altered with time to an extent unknown to our current imagination. It is the extremely fast pace of the novel that largely muddles things up. But since it is a sci-fi novel, there is a lot of room for experimentation as there are no hard and fast contours of what is right and wrong. Laden with thrills, aliens, courtroom scenes, betrayals, murders, gadgets and space voyages, Europa is overloaded with all things presumable to the Alpha-male imagination.

Can’t wait to read Europa? Buy your copy at the link below