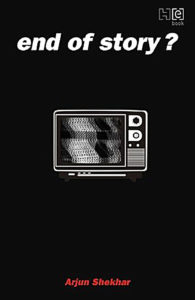 There are few books which leave you with mixed feelings when you finish reading them. There are times when you love the story and cannot have enough of it, and then there are times when you just want to put the book down and take a break because things don’t quite add up. And the biggest dilemma comes while reviewing such books. Should the review be more positive or should more of the negatives be highlighted? While reading Arjun Shekhar’s End of Story I had experienced similar feelings reeling in my mind. But once finished, I knew the positives far outweighed the negatives.

Shukrat Ali was an anchor with Khulasa channel before the government’s ban on all forms of electronic advertising which led to the closure of all TV channels. A few months back, his boss, Satya Sengupta aka Shh, was murdered, and now Ali is summoned by the court to give his testimony in the case. He decides to be prepared for the court appearance and begins to pen down his testimony which forms the story of this book, End of Story.

“I have been summoned to narrate the story of my life in court tomorrow. They’ll expect me to focus on the parts relevant to the case but then, that’s almost my entire life.”

End of Story begins with the kidnapping of Ali’s daughter Quyamat and ends with Shh’s murder. The events in between, narrated by Ali, without leaving even the minutest of details, forms the crux of the book. Most of the story is set in Vidarbha, where Ali is sent to investigate about the ghost of a farmer who committed suicide. There he stumbles upon something big – an industry-government-media nexus and decides to expose it. What happens next forms the rest of the story.

“Why was Shh murdered?”

“Why has the government imposed a ban on electronic advertising?”

End of Story is written in a very interesting fashion; each chapter begins with a cross-examination by the prosecutor and Ali’s answer forms the story of that chapter. The way in which the plot is built is very nice and makes up for the lack of much substance in the plot. The detail with which the Vidarbha region and the native Gond tribes are described is amazing. The language used, adds flavour. It is an interesting fusion of simple words and deep thoughts.

The book has an interesting mix of characters; from the self-righteous Ali to the ever-angry Shh to the inquisitive Quyamat to the obnoxious Tauji to the babbling Pixie, the book has it all.

The climax is one of the most important parts of any book. It is the part which leaves you sweet or sour. The climax of End of Story is fantastic but I cannot delve the details without giving out spoilers. Suffice to say this book has one of the better climaxes I’ve seen in recent times.

One word of caution – not everyone will like End of Story, and finishing it would require lots of patience. But you’ll not be disappointed at all once you finish reading it.