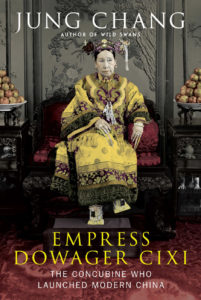 Being a woman, I love reading about women in general and it is, therefore, surely a treat when one gets to read about someone as powerful as the Empress of China – Her Highness Dowager Cixi. You must not have heard about her, but do not mistake your ignorance for her non-importance, for she was the woman who checked a spineless dynasty from falling, prevented a shattered kingdom from failing and most importantly opened the doors for the much awaited and due modernization of an ancient kingdom, which at that time was still living in the middle ages.

Selected as the concubine for the then Emperor’s son, Cixi was among sixteen other girls who were chosen for the same role. When it came to her husband, she had no power over him, and in fact, as is quite plainly suggested in the book several times, he might have even disliked or detested her for her unexceptional political curiousness. Despite being so low in designation, she rose to such heights of power and this happened due to one fortuitous incident – her giving birth to the emperor’s first child, a male heir. Very soon, having attained the 2nd position among all of the emperor’s wives, she had the opportunity knocking on her door when her husband suddenly passed away, leaving the kingdom to his trusted council.

Cixi, knowing the council well and being sure of the fact that they were not capable enough to rule an ever modernising China, quickly arranged a coup and subsequently through meticulous planning and execution, had herself reined in as the true ruling monarch. Thus, there began China’s path to being an open and more engaging nation. However, her path was not a bed of roses, and she faced numerous occasions of conflict, betrayal, disloyalty, plotting and scheming. But, being who she was, she battled it all and laid the foundations upon which modern China was built.

Though, the book being a bit academic in nature, I loved every word I read. The meticulous and extensive research of the author is praiseworthy as is also her writing skills which make reading this book like reading a fairy tale; very smooth and very intriguing at the same time. I loved the way the four hundred odd pages, makes you wanting for more rather than making you put away the book. I also enjoyed learning so many new things about the Chinese history and culture, and it was because of this that I choose to read each chapter very slowly, analysing each incident and often memorising the events and names of people concerned with them. The book, Empress Dowager Cixi, has immense historic value and I would suggest it as a must read to every history enthusiast, for even though it is a history book in itself, it does not, in case make you feel as if you’re back in a classroom, trying to cram all that uninteresting dates,  names and events. The story moves almost like a fast-paced thriller novel and is full of scoops, scandals, betrayals and other “masala” stuff to keep you flipping pages and gorging on all it has to offer. So, what are you waiting for, go and grab a copy of this awesome book – Empress Dowager Cixi.