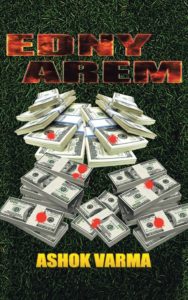 We all have seen and loved the movie Mr. India in our younger days. Now, imagine what if you have a book on the same concept. A watch like contraption which when worn on your wrist will make the wearer invisible to the normal eye. Sounds interesting! doesn’t it? In his book Edny Arem, the author Ashok Varma has borrowed the theme from the super hit Bollywood Blockbuster Mr. India and has surely done a good job out of it.

The story starts when surprisingly a man murdered just outside a police station, in full view of a policeman cannot be helped because nobody had seen the killer. As the investigation unravels, it is soon discovered that the murder was not just a one-off incident but was linked to something bigger and more terrible; something which smelled of terrorists and terrorism. Crime Branch Inspector Shiv Prasad and his assistant Elizabeth are on to the case but the more they seem to dig, the more complicated the case becomes, until one day Shiv Prasad comes across Anil. Anil helps them discover something which they could never have thought of in the wildest of their dreams. Not only had it seemed outrageously impossible but extremely dangerous too.

But the cat was out of the bag, and EDNY AREM was already onto his next deadly plan. So what will Shiv Prasad do? Knowing very well about the lethal advantage that the killer has, how will he be able to put rest to his treacherous plans? Will he finally find the invisibility gadget? Or will the terrorist succeed in raining terror onto the Indian streets? And why EDNY AREM? Why did the terrorist choose this peculiar but funny name? Know this and much in this enthralling tale of good and evil.

The book, as already stated is a gripping tale where the game of cat and mouse played between EDNY AREM and Shiv Prasad is highly action-packed and quite captivating. I liked the plot and the story line, the fact that the story has only one main plot keeps it running swiftly and smoothly. The narrations are interesting too and so are the characters. I particularly liked the characters of EDNY AREM, Shiv Prasad and Elizabeth. Shiv Prasad comes across as the perfect police cop and EDNY as the perfect villain; the key ingredient of a good Bollywood masala, should the author choose to tread that path one day. The romance angle between Elizabeth and Shiv Prasad also appeals to the hopeless romantics like me who can never get weary of it.

Overall, the book is a great read and therefore I strongly recommend it to all my readers. I rate this book four out of five stars and sincerely hope that one day I get to see a Bollywood flick made out of this one.