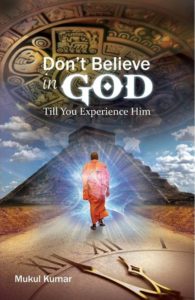 Nowadays I get many book review requests for books by Indian authors and now that I have started reading a lot of them, I know that the quality of writing is certainly on the rise. I say this because as I read more debut authors, I realise that nowadays they are not shy of venturing into new genres and in exploring what different themes might offer. No more do I see the typical boy meets girl college/office romance type of books and I am really glad for it.

Some time back I received the book “Don’t Believe in God Till You Experience Him” by Mukul Kumar. At the time, I did not know what to expect from the book because the title; to be very frank, was a bit too lengthy for my taste. But as I sat down to read it, I realised that I actually have a very good story in my hand.

The story is of a guy Mukul who grows up in a remote village of Bihar and yet destiny brings him to brighter things in life. He moves forward in life, gains a higher education and at that time he is introduced to a Brazilian missionary who conducts regular conferences and classes and represents a cult in Spain which is headed by a Spiritual leader from Mexico. He is drawn to it and soon finds himself drawn away from things which earlier mattered to him. He disconnects himself from his family, neglects his job and finances and lands up in the monastery in Cataluna in Spain in order to become a missionary.

The leaders of this monastery predict doomsday and order their followers to build safe houses and prepare for the rise of a new human race – Koradhi. But the predictions don’t materialise and what happens next is only for you to know when you read this book.

I liked the concept and the theme of “Don’t Believe in God Till You Experience Him”. The book is a very realistic take on what is exactly wrong with today’s “wannabe godmen”. Most of these so called godmen are hardly men of God but more likely men of money, lust, power and ambition. There is hardly anything spiritual about them. I liked the characters in the book. The main character is charming and very realistic. The way his story has been told right from his humble beginnings in rural Bihar to his stint in the monastery in Cataluna makes the reader connect with him on a deeper level.

I also liked the cover of the book. It is aesthetically designed and is pleasing to the eye. It also conveys to the reader what the book is actually about. The climax, though a bit simple, is extremely realistic. Not many people may agree with me on this, but not everything is fair and not every story ends on a fair note. The last few pages where the author pours his heart out are overwhelming and sincere. They will definitely relate to many people who have been on a similar quest for God.

Though “Don’t Believe in God Till You Experience Him” is a fairly good read, I believe it could have been still better. There were a few areas which could have been cut short – like the rural background story could have been a bit more condensed. Also, the premise on which the blurb attracts the readers is not adequately met in the book. The book promises something but delivers something else, which though good is definitely not the same as the one promised.

Also, the post-doomsday scenario is a little vague and lacks action and thrill. A little bit of development over there could have done wonders. This being the author’s first book, the writing is a bit amateurish, but this is mostly always the case with debut authors whose writing flourish as they write more and more. That being said, I still recommend this book to all readers of fiction and rate it four out of five stars. I sincerely hope that “Don’t Believe in God Till You Experience Him” will make a difference in many lives.

Book Review Don't Believe in God Till You Experience Him Mukul Kumar
by Sankalpita
Leave a Comment
Prev: One Sip at a Time | Keith Van Sickle | Book Review
Next: The 365 Days | Nikhil Ramteke | Book Review