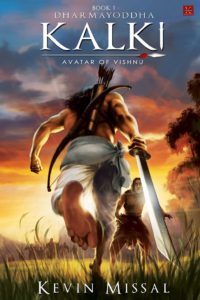 “Thereafter, at the conjunction of the two yugas, the Lord of creation will take His birth as the Kalki incarnation and become the son of Visnu Yasa. At this time the rulers of the earth will have degenerated into plunderers.” – 1.3.25 Srimad Bhagavatam

Kalki, as can be gauged from the aforementioned lines, is the prophesied 10th avatar of Lord Vishnu who will take birth in Kal Yuga to end Adharma. As is obvious from the title itself, the book, Dharmayoddha Kalki tells us the story of the Kalki avatar. A note from the author at the very beginning of the book also informs the reader that the book is more of a fantasy than mythology or a modern retelling and that it only takes inspiration from the idea of Kalki.

Kali is a young charismatic leader who after leading a successful movement against the Manava king Vedanta, has brought together the many tribes that inhabit the ancient land of Illavarti. In a bid to ensure inclusion of all the banished tribes, Kali seizes control of the capital city of Indragarh.

On the other hand, Kalki is a young and innocent village boy who has lived a sheltered life all along. Kalki continues to enjoy the perks of living a carefree life until one day his whole world is torn apart by Durukti. Durukti, who is the sister of Kali and who in the name of saving her brother Kali from an unknown illness is hell-bent on destroying Kalki’s village.

What follows will change Kalki’s life forever but will Kalki be prepared for the catastrophe that awaits his village? Will he gear up to the challenge that fate will throw his way?

The writing style of the author

The writing style of the author is such that it weaves elements of fantasy fiction around a mythological legend in a seamless fashion. What I liked about Dharmayoddha Kalki was that it offered much more in terms of plot than a usual character-centric book does. Of course, the book is about Kalki but then it is also about the various other strong characters and some really interesting side plots.

The characters will avow you

Kalki emerges as a powerful yet passionate character who is fit to rule the masses and become their King. Apart from Kalki, there are many other characters who will compete for the reader’s attention and charm her to no end. Most of these characters have varying shades of grey in them with a kind of seduction that can only come from evil. A few other characters that caught my fancy were Durukti, Kali and Kripa.

The climax is pretty good too

Dharmayoddha Kalki has been written as part one of the Kalki series and thus the story that it attempts to tell remains incomplete. Nevertheless, the author leaves his readers at a major turning point in the life of Kalki. The narration and the story is so compelling that there is seriously no way that a reader can refrain from reading the part 2 of the series.

The story of Dharmayoddha Kalki spans over the vast lands of Illavarti and captures the story and lives of its many inhabitants. There are incumbent kings, corrupt officials, power-hungry tribal, divine gurus and an incarnation. All this when combined with fantasy and mythological fiction elements provides for a pretty entertaining read.

My final verdict for the book is 4.5 stars in the entertainment quotient. I loved reading every single page of it. Even though it was a lengthy read by normal standards (around 470 pages), it nowhere proved to be a dull read. Every single chapter had some new development and action and the plot kept progressing at a steady pace.

There was a time in the book when the romance of Kalki and Lakshmi seemed forced and unnatural. It seemed a bit off in an otherwise smooth narration. The book is good enough without the romance in it, however, if the author is inclined to include romance, it should be done with a bit more effort and skill.

Pick it up if

Pick the book up if you like sagas, lengthy tales, legends, fantasy or mythology. This book tells a captivating story and I am sure anyone who picks it up won’t be disappointed.