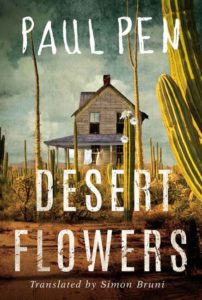 “The flashlight illuminated his car’s Colorado license plate, and a warm feeling filled him with peace. In the middle of the night, lost in that desert, his house seemed as unreachable as the moon that shone in the sky, but his 1959 Lincoln was there, and in some way, it was like being home.” ~ Paul Pen, Desert Flowers

Desert Flowers has a beautiful cover and a very interesting blurb. One look at both was enough for me to download the book on my Kindle and to get on it. The blurb, however, is a bit misleading. It gives you the feeling that the story is a thriller but unfortunately, it’s not entirely that. It is a surprise package which will give you different vibes at the turn of every 100 pages and thus if you are looking for a book and thinking, “Surprise Me”, this book would be the one to go to.

What is the storyline?

Elmer and Rose have managed to build themselves a beautiful house with an extraordinary family in a picturesque piece of land. They live with their four daughters – Melissa, Iris, Dahlia and Daisy in Mexico’s Baja California desert which, to be precise, is in the middle of nowhere. Away from the hustle and bustle of a city life, their world is complete even though sometimes it does get lonely.

The smooth equation of their life, however, changes when a young hiker called Rick stumbles upon their house. Rick is looking for a place to stay the night and the family allows it, albeit reluctantly. They soon grow uncomfortable when Rick starts getting snoopy and suspicious.

Soon, they will realize that Rick has an ulterior motive and his own personal secrets. But won’t it be too late to stop the wheel of time which has already gained momentum and is rushing forward now to crumble all their lives forever?

“She knew that many children go through a phase when they rebel against their world, their home, their family, but there was something deeper in her daughter’s longing.”

The characters of Desert Flowers are an okay bunch. I love the way Elmer and Rose are shrouded in mystery throughout the course of the book.

Their past lives, the reason they chose to live in a place so secluded and which is so far away from their homes in America remain a mystery always.

I would have liked if some more light was shed on this aspect of their lives. There was only a superficial mention of their past and nothing concrete which is a sad thing because their character could have done with some interesting backstory; the kind which would have given them some depth and persona.

The daughters are adorable. Each is different from the other and each is on a different stage of childhood.

Iris, being the eldest at sixteen, is a slave to her hormones.

Melissa, at thirteen, is still caught in her adolescence. She feels lonely and desolate always. She is one girl whose character transformation in the later stages becomes one of the best things about this book. Almost instantly, she transforms from a silly adolescent who likes talking to and dressing up stones and cactuses to somebody who is wise beyond her years.

Dahlia and Daisy are lovely too with their childlike banter and innocence.

The writing style and the plot

Paul Pen’s writing style is pretty simple and straightforward. She manages to create mystery and intrigue throughout the book. For the first 100 pages, the book gives the vibe of an edge-of-the-seat kind of thriller. That changes in the next 200 pages as the story itself starts taking a new identity.

I love how the author is able to bring out raw emotions of all its characters.

The plot of Desert Flowers reveals itself in layers. It is structured in a way which keeps the reader guessing right until the end. There aren’t many sub-plots to speak of. Also, the story doesn’t run in flashbacks so it is pretty simple in that sense.

The climax is where Desert Flowers wins again. It is unpredictable and gives a befitting end to the story of Elmer, Rose and their four daughters. I would like to comment on it some more but I am afraid that in doing so I might give away some spoilers. Hence, I will do what is always best course in such cases – I won’t write a word more.

My recommendation would be to go for Desert Flowers.

As I’ve already stated in the above paragraphs, this book takes a new direction (even a new genre) at the turn of every 100 pages and that is something incredible.

It is a slow thriller which becomes deeply emotional towards the end and manages to bring out emotions that you never knew existed.

It’s a unique story of lies, deception, love, hope and justice. It is powerful and sad and just so different from every other book that I’ve ever read that I cannot help but recommend it to all my readers.

Can’t wait to read it, buy your copy of Desert Flowers from the link below.