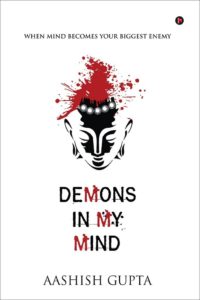 Pain is termed as a distressing feeling which one feels and is caused by intense or damaging stimuli, but what if someone told you that pain and suffering are a manifestation of our own mind. Some people fail to differentiate between pain and suffering. The book “Demons in My Mind” by Aashish Gupta tries to relate the same concept through three very well written, thought-provoking stories.

What if all the evil in the world exists because of our view of the world, though the concept might be seemingly easy to understand but is it that easy to accept? The book tries to deal with this topic by taking the examples of murderers, rapists, and serial killers; the insane of our society and what goes on in their heads while committing these heinous crimes. How and why they fail to differentiate between good and evil?

“Demons in My Mind” tries to make us understand human emotions in a better manner, emotions like Anger, Angst, Anguish, Hatred, Pride etc. through three major stories entwined with the plot surrounding Dakshesh. Dakshesh, a humble man who is merciful, compassionate, benevolent and charitable in nature. Who is agonized by cancer and is running the last mile in his journey of life, while seeking “The Three Monks” who are believed to have mystic powers, but are elusive in their nature and are rarely known to make themselves public.

It is these three monks who narrate their own stories, and from their own experiences, we are shown a side of humanity that majority of us have never been acquainted with. A side which we’ve chosen to ignore but which we know to exist among us. From their stories, we come to know that all three of them have been criminals in their past lives, the lives which once they decided to quit, they never looked back at. Depicting that even the most savage and barbaric of us humans are somewhere down capable of feeling compassion, the book goes on to explain how certain incidents in the monks’ life made them the way they are.

The book tries to deal with how our mind tries to cope up with a loss, after dealing with a terrible incident. The author has touched a very sensitive topic and I was pretty amazed at the level of maturity the book has been written with. How well the dots connect one can only see through when he/she is done reading the book. “Demons in My Mind” is one of those books which are hard to put down and appealed to me in a manner, which few other books from the same genre have.

The depths with which the author manages to portray the characters is pretty astonishing, the undoing of an artistic god, a loss of innocence to the evils of our world, a heartbroken lover. The three monks were to me like an evil triumvirate, which eventually gave up their evil ways on witnessing an eye opener incident. The only thing which bugged me a little were the few typos, but I’m sure story in itself is adept enough to ignore such minor blemishes.

Final word – A must read for those who are intrigued by the psyche’ of humanity’s darkest minds.