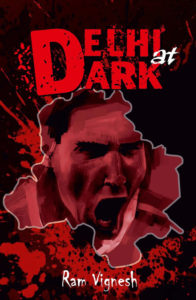 I don’t know where to start. I guess my ratings say it all.

As a reviewer, I rarely come across a book which makes me think hard in deciding where to deduct a point in the ratings.

In the past year, I’ve had two favourites – Chetan Raj Shrestha’s “The King’s Harvest” and Anand Neelakantan’s “Asura”. Fortunately, I now have a third too.

Ram Vignesh’s “Delhi at Dark” is absolutely amazing and spellbinding. Going by its cover I could have never imagined that this book would be a sheer work of creative brilliance that it actually turned out to be.

Every aspect of this book is absolutely fantastic and captivating.

The story starts with the brutal murder of a young girl in the capital city of India.

Before the mystery is solved, another girl goes missing and is soon found to be dead too. That the murders are the work of serial killer is not hard to guess.

But what makes the task difficult is that the killer leaves no trail. It is as if he is a ghost.

CID Detectives Jay Mithra and Asra Khan take over the case and call Amar Rathore, the queer but brilliant investigator of the IB, for help. They are also helped by people in their department and Jay’s twin sister Janvi and Amar’s wife Tina Rathore.

As they rack their brains over the serial killer’s motives and future moves, a connection is found. This connection takes them on an exploration to Dispur in Assam and Godhra in Gujarat, where unsolved serial murders occurred in 2001 and 1988 respectively.

To add more to their existing complications, they soon sniff a rat among their department who is aiding the killer.

So how will they solve the murder mysteries? Will they be able to uncover and defeat the country’s smartest ever serial killer? What more surprises lie in their way?

To know this and much more, you will have to get the book handy.

Moving on to the best part of “Delhi at Dark”. My favourite was definitely the plot, followed by the characters. The plot was so intriguing and the narration so interesting that I unbelievably finished the whole book in 1 day (which I must say, for a working woman, commuting daily 20 km up and down for her office, is rather a record).

The climax too, was equally mystified, for up till the end, the reader gets no clue as to who might the killer actually be. Wherever the killer’s scheme seemed to get a bit boring or monotonous, there was a new turn and twist which left me dazzled and puzzled to the core.

“Delhi at Dark” is definitely a masterpiece and I can proudly say that I am lucky to have come across this excellent piece of work. A must-read for all mystery lovers, even the non-fictioneers should give it a try (trust me, it will not disappoint you).

So go ahead, what are you waiting for? Grab a copy today..!!

Did you find this review helpful? Do let us know by dropping a line below.