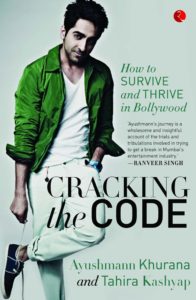 Most of us have, in our younger and juvenile years, dreamed of making it big in the tinsel town and maybe some of us still harbour that dream. But honestly what are the odds? What are the chances? Somewhere down the treacherous path, we all buckle down and slip away, slowly moving towards a safer, secure and guaranteed future. But this is not the story of most of us. This is the story of one such outsider who had slowly and steadily nurtured his dream and eventually made a mark in this multi-billion industry.

Ayushmann Khurrana along with his super supportive and loving wife Tahira Kashyap pens down the story of his career in “Cracking the Code”. From the young juvenile small town Chandigarh boy who participated in the reality TV show Popstar to the guy who won the MTV Roadies Season 2 to the guy who became one of the most popular RJ in India to the guy who finally became the face of the super hit blockbuster movie Vicky Donor, this book will take you through the roller coaster journey which made Ayushmann the star that he is today.

The journey was not an easy one and the path was rather treacherous but nevertheless, Ayushmann trod on only to land with success many years later. This book is his attempt to decode some mysteries and some myths which envelopes around being successful in the tinsel town. This is Ayushmann’s own guide to making it big in the Bollywood. Full of anecdotes which are both professional and personal and sometimes even painfully honest, this candid book will tell you the do’s and don’ts for an aspiring actor and the good thing is that the code can be easily applied to other professions too, thus benefitting the reader in general.

Moving on to the positives and negatives of “Cracking the Code”. The best part is its candid narration style. Ayushmann speaks from his heart and he is quite candid in opening up to the reader. He even points out several of his personal and professional mistakes along the path and urges the readers to take heed and learn from his experience. The book seems more like a personal conversation with the writer than an actual book and it is this which makes it quite a hit amongst readers like me.

I also liked the brevity of the chapters and the avoidance of the unnecessarily lengthy pep talk which most books are full of. The idea of putting the codes in separate boxes and highlighting them is also cool. I don’t have many qualms about the book except for the fact that it seemed a bit too short and I wanted to keep reading on even when it ended. All in all, the book is a short and sweet read and I, therefore, recommend it as a light non-fiction read to all my readers.