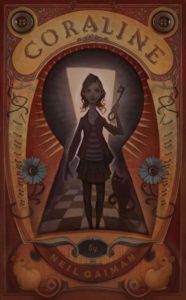 I live in the small town of Hosapete near Hampi in Karnataka.

There aren’t many choices available to buy books here and so, whenever I get a chance I travel to the nearby Hubli, I religiously visit the Sapna Book Mall there.

It was in those magical lanes, full of mysterious and adventure-filled titles that I discovered Coraline. Coraline, to me, promised a world full of sinister-looking monsters and deadly adventures and thus I eagerly picked it up.

This is yet another of those Neil Gaiman’s modern-day classics and is, therefore, a must-read for every book lover big or small; young or old.

Coraline is the story of a young girl who comes to live in an old mansion which has now been converted into multiple apartments where Coraline’s family now lives with a few others.

Coraline is an adventurer by nature but she hates it when Mom and Dad get busy with their lives and have no time to play with Coraline.

It is one of those days when Coraline is feeling discarded and lonely when she discovers the secret passage to the apartment next door.

These parents want to play with her and want to entertain her but still, they are a little different and a little scary too. They have black buttons instead of eyes and they want Coraline to stay forever with them.

Coraline initially enchanted by this beautiful and unrealistic world soon realises her mistake and sets on her way back to her apartment.

But once she is back, she realises that her original parents have been kidnapped by her other mother.

So will Coraline rescue them? Will she able to defeat and outsmart the plans of her evil other mother? Will Coraline too have buttons on her eyes like her other mom and dad?

To know this and much more about what will happen to Coraline, read this interesting little book today!

What I really liked about in the book was its strong plot which promises both thrill and creeps.

I also enjoyed the author’s introduction at the start especially the part where he states that he wanted to create a story which helps the children in understanding one simple truth (something which he tells, he wished somebody would have told him in his childhood) – that being brave does not mean not being scared but that it means doing whatever needs to be done nevertheless.

The character of Coraline and the other mother are really interesting and deep. They alone rule the entire book from the start to the end.

I liked the way in which the book also builds upon the need to be good and kind to others even in the direst of circumstances.

A Hollywood movie has also been based on the book and I am told that it is better than the book (I haven’t seen it yet).

Overall the book is a treat to read and I will, therefore, recommend it to every child reader and maybe to also to those adults who enjoy such reads.