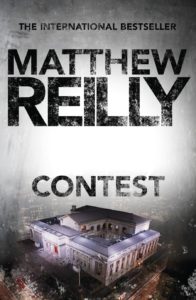 “The New York Public Library. A silent sanctuary of knowledge; a 100-year-old labyrinth of towering bookcases, narrow aisles and long marble hallways. For Doctor Stephen Swain and his daughter, Holly, it is the site of a nightmare. Because, for one night, this historic building is to be the venue for a contest. A contest in which Swain is to compete – whether he likes it or not.

The rules are simple: Seven contestants will enter, only one will leave.”

While Mathew Reilly is now famous for his fast, action-packed novels, it is entirely understandable why no publisher would have wanted to publish his first book, Contest.

This is a Science Fiction involving aliens and a fight to the death competition.

It has the usual good guys and bad guys, but you find that the book is written really well and no matter how much you think this is implausible, you will only continue to read as Reilly manages to keep the reader wanting to find out what happens next.

The story involves Dr. Stephen Swain, a radiologist, who is chosen to represent Earth in an intergalactic competition known as the Presidian.

He is transported to the New York Public Library, where the contest is to take place.

His daughter Holly is also accidentally teleported and it is now down to the wits of Swain to ensure that he and his daughter stay alive in this mad competition.

The only way out of it is if you are the last man standing.

He is helped by an alien going by the name of Selexin, whose race is too small to take part in the competition but whose lives depend on whether or not the competitor they are associated with, win the contest.

As one would expect, humans are portrayed as the good guys and there is an evil alien that would go to any lengths, including cheat, to ensure that it wins the competition.

The novel races along at a good pace and you would find yourself turning the pages at a very fast rate, willing yourself that nothing happens to either Swain or Holly.

However, the climax was a dampener and the author could have really done a better job in giving a fitting climax to a story well-written.

In the end, though, you can only say that you enjoyed the book and that, perhaps, is what an author would really like to hear.