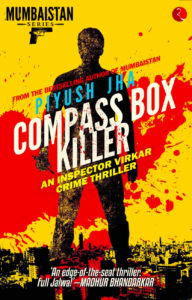 With over a hundred options, every week, to choose from, selecting a good book to read is a very difficult task. Some go with the cover, some with the author name, some with the title and some with the synopsis. I prefer going with the genre. I am a huge fan of thrillers in general and murder mysteries in particular. So when I received Rupa Publication’s July reading list, Piyush Jha’s Compass Box Killer involuntarily became my first choice. Having read many books of this genre, I generally set the standards high and have a tendency to dislike books even if there are minor faults in it. Now, if you see the ratings I’ve given this book, you’ll understand how much I like reading it.

The book, Compass Box Killer, begins with the murder of a Senior Inspector in Mumbai Police. When Inspector Virkar of the Crime Branch is called in to investigate the death, he quickly concludes that it is a murder and also discovers an old & battered student’s compass box at the scene. The compass box contains the name of the next victim, thus giving the name of Compass Box Killer to the murderer. In spite of knowing who would be killed next and in spite of the due precautions taken, Virkar is unable to stop the killer and he succeeds in claiming his next two victims too – a doctor and an NGO activist, leaving a compass box behind at both these scenes. The rest of the book is about Virkar’s investigation into the motive behind the killings and his attempts to stop the killer.

“Who is the compass box killer?” “Why is he targeting only these specific people?” “What is his motive behind this?”

Piyush Jha is a Bollywood director and expecting his book to be any less in drama and masala would be an error on our part. The heroism of the protagonist, the romance, the gory nature of the villain, etc. can be found in any typical Hindi movie. The funny Hindi one-liners, used by Virkar are hilarious – “Ankh khuli andhe ki, toh vaat lagi dhande ki”, “Naseeb gandu toh kya karega Pandu” and much more. Jha’s descriptions of the Mumbai police, the media, the NGOs, etc. are very realistic.

Inspector Virkar’s character is awesome. He is an excellent cop with an enviable record; he has a knack for solving mysteries and an eye for details. The best trait that I liked was his preference for a particular drink – Godfather beer, like James Bond’s vodka martini, shaken not stirred. The way the other characters have been described, too, is equally good.

I would recommend this book to my readers. It is a good suspense murder-mystery. Do not expect anything less than a Bollywood extravaganza when you pick it up.