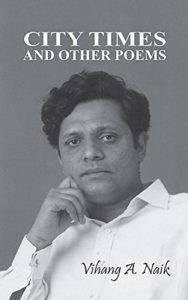 Poetry is one of the beautiful art forms that can truly capture what the artist is imagining or going through.

While minimalistic in terms of the words used, the beauty lies in being able to send the message across in a few short lines.

While novels and short stories use a lot of verbiages to paint the picture in the reader’s mind, a poet has the innate ability to do it in a few words and without missing a beat.

While there is a general feeling that books are the traditional means with which one can tell a story, a poem in the hands of a good artist can do wonders.

And that is exactly what Vihang A. Naik has done in his latest collection of poems “City Times and Other Poems”.

The anthology has essentially 5 poems and each work is sub-divided further, giving the reader pause to reflect on the theme and message contained in it.

It is but invariable to play favourites with any anthological works and my personal favourite is “Mirrored Men”, in which Mr. Naik compares man to various other supposedly deceitful creatures like spiders and chameleons but shows how the man himself has been the most deceitful in everything he does, the masks he wears, and how he can no longer look at the truth anymore and his heart contains nothingness.

The title poem “City Times” is the lengthiest poem and is a reflection on how a city changes with time.

The other poems also have similar themes that make the reader reflect and dwell on how they are living the supposedly comfortable and successful lives but in truth are just hollow.

The poem “Self Portrait” throws a real surprise at the reader, but is extremely effective in making you think deep.

On the whole, Mr. Naik does a fabulous job in trying to make the reader introspect more about their lives instead of going through the motions.

All the poems and the themes are relatable to anyone who reads it, which is where the beauty of the anthology lies. Irrespective of whether you read poems or not, “City Times and Other Poems” is one anthology that should not be missed.

Book Review City Times and Other Poems Vihang A. Naik
by KC
Leave a Comment
Prev: Why the Vada Seller Refused a Sale | Satish Mandora | Book Review
Next: A Hypothesis – To Provoke Your Thoughts | Pranjal Ranjan | Book Review