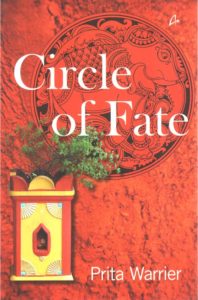 If I have to compare the author’s style and choice of theme to another famous author’s work, I would proudly name Mr. R.K. Narayanan and Ms. Sudha Murthy as my choice for these are the names which flashed in my mind while going through the gripping narrations in this book. And now that I have captured this thought in words, I can safely proceed to state that in fact, i liked this particular book much more than a few of Ms. Murthy’s creations.

But more of that later, let’s talk about the story and the plot of Circle of Fate first. Sheela is a young woman whose life is suddenly in doldrums when her parents with whom she lived in the United States of America, died in a car crash. With no one to share her love and grief, she one day decides to call her long-estranged grandmother who lived in Kerala, India. Her grandmother was her only other family member and one with whom she had never spoken or met before, as for some reason beyond her knowledge her father had long broken all his ties with his mother. Now, Devaki, the grandmother who waited for her entire life for the return of her son, waits for the return of her granddaughter and for forgiveness from the nightmares of her past. Forgiveness, because she harbours an evil secret; a fact which is so malicious that it had driven her child away from her life.

The main positives of Circle of Fate are a strong plot and a unique story line. The characters are also very interesting and have a remarkable depth about them. The narration is vivid and beautiful and does a wonderful job of describing the life – social, economic, and religious in a tiny hamlet of Kerala. The author also does a great job of bringing out the best in her characters in terms of an intense interplay of emotions like love, hate, sorrow, greed and desire. The Indian-ness of the theme and narration also makes the book a pleasurable read. I particularly liked the parts where the author describes Lakshmi’s life as a child and her relationship with Krishnan, Janu, Kuttan etc. That the author chooses such a different and nice way of introducing the history of her characters is very impressive indeed. The icing on the cake is the delightfully appealing cover which agreeably captures the true essence of the book. The blurb too is good and adds to the unique appeal of the book.

There are not many negatives in the book and a few present can be comfortably ignored. The main issue I found was that the story, especially at certain crucial junctions, progresses too slowly. I would have also appreciated a little cutting short of the much lengthy narratives which made the book a good 280+ page read. Also, the climax which was quite different from what I had initially imagined and much to my dismay was not developed to a good end. Thus the end seemed a little dull and insipid to me. Having said that, Circle of Fate still goes into my list of best read books in 2015 and I, therefore, recommend it to all my readers.