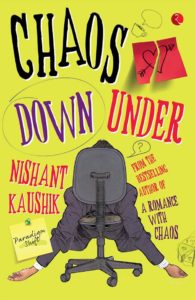 Humour is possibly the most difficult genre to write on. Not everyone is good at it. There have been a lot of attempts to write humorous stories but not many of them have been successful to make the reader laugh. Of course, no one can possibly reach the heights of PG Wodehouse, who had a fantastic way with words, but inspiration can certainly be taken from his form of writing. Wodehouse not only had the talent to put words together in a way that made the reader laugh out loud, he also created situations that his protagonists always found themselves in, thanks to their antics.

Office humour has been one such genre that has been written quite a lot on by Indian writers, and Nishant Kaushik’s Chaos Down Under belongs to the same space. This is a sequel to his earlier book “A Romance with Chaos” and is part of a trilogy. Nakul Kapoor, the protagonist, finds himself as the project leader of an assignment from an Australian client and has no resources whatsoever to get the job done. And so starts a series of events in which Nakul finds himself trying to get out of, including fudging data, dealing with a client that comes to work on a horse, a neighbour that views him as a free service guy, a girl who he wants to have a relationship with, etc. How he manages to extricate himself from the situations forms the crux of the story.

The story is set in 2 different locales: one is the Bytesphere office in Mumbai and the other is at the client’s location in Australia. The humour that the author tries to produce is well done, especially with Nakul Kapoor’s neighbour Suresh, which is my personal favourite. There are certain situations that leave you laughing at the absurdity of it all, and one can’t but admire the ingenuity with which Nakul manages to find himself in tricky situations. The reader would almost feel like wanting to do something to get him out of there.

But readers may feel that Chaos Down Under is a book that they may have read before, with many such titles available in the market. The plot is a bit repetitive, in the sense that it’s been done before. Though the story may be nothing new, the humour certainly makes it a worthwhile read. And the best part is that you don’t even have to read the first book in the trilogy to follow this one as there are very few, almost negligible, references to the earlier adventures of Nakul Kapoor.

So, pick up Chaos Down Under if you are looking for a good time laughing at the antics of a protagonist that cannot help himself from falling into unfortunate situations.