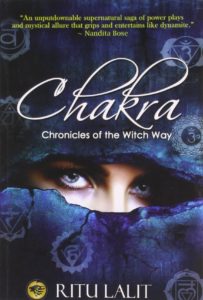 Supernatural is always an interesting topic to read on.

There is the element of intrigue, and at the end of the book, depending on how the story ends, you always feel good to know that there is something larger than life out there.

It helps in getting through the mundane tasks that one is asked to do in everyday life. That’s the best thing about books. It opens up a whole new world that is totally different from what the reader usually experiences.

To paraphrase Calvin, it’s a magical world out there!

So, when I picked up Ritu Lalit’s Chakra: Chronicles of the Witch Way, I was interested to see what the story was about.

The blurb at the back was certainly promising, alluding to witchcraft and how the central character has suppressed the ‘skills’ that she possesses and is forced to use them so that she can protect her family.

In short, it promised to be exciting and adventurous, and I was certainly interested to find out if the book lived up to the promise.

Even the cover page, though similar to another book, felt perfectly suited to what the blurb at the back suggested.

The story is about Parineeta Mohan, who belongs to the Japa community, but has chosen not to use her witchy powers.

Instead, she decides to live a normal life and raises her niece and nephew in the same way, keeping them ignorant of their heritage.

However, tragedy strikes as both of them are kidnapped and the only way that Parineeta can save them is by going back to being a witch and using her powers.

In this, she is helped by Jorawar, who belongs to Pax, a disturbing organization.

The plot is quite complex, but Ritu does a good job of ensuring that the reader does not lose track of the story.

The characters are sketched in a delightful way, though maybe a little more depth would not have hurt the book.

Chakra: Chronicles of the Witch Way starts off in a very interesting way, with the introduction of the different clans in the Japa community, who were gathered for a ritual that is being conducted by Guru Tapan.

This is where Jorawar is initially brought into the picture, and the reader already gets an idea that he would be playing an important role in the story.

Though the story in itself is good, there is the problem of poor editing that is a real turn-off for the reader.

Another problem was the dialogues of the characters in the book. It’s hard to describe but one could feel that the conversations between the characters lacked maturity.

But for these, the book would probably have been a fantastic read.

Personally, I am not much of a believer in the Kundalini, but when you read Chakra: Chronicles of the Witch Way, you come to think of it as something that may indeed be true.