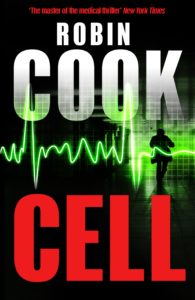 Mobile phones have penetrated deeply into our daily lives; they have become indispensable. They started as a communication device, and slowly outgrew themselves; now a mobile phone can be used as a music player, a television, a personal assistant, video conferencing device, dictionary, PC, organizer, and many more other things. Now imagine a step further – mobile phones being used as a personal doctor who is available 24×7, who can diagnose your ailments much before they surface, and offer advice on all possible treatments; a doctor who can monitor your sugar levels, and inject a dose of insulin when necessary. It would be wonderful, wouldn’t it? Robin Cook tends to disagree and that is what his latest book ‘Cell’ is about – many unwanted and unforeseen consequences arise when one becomes over-dependent on technology.

“Think of iDoc as the Swiss army knife of health care. Attachable sensors and independent probes that communicate wirelessly will make the phone a versatile mobile laboratory. A client could simply place a saliva or blood sample directly onto the touchscreen for an analysis.”

When Dr. George Wilson, a senior radiology resident at the L.A. University Medical Centre, hears the news of a new smartphone app – iDoc, which is a fully customisable primary care physician capable of diagnosing and treating patients, he is happy because the app has the potential to offset the shortage of primary care physicians in America, but at the same time he is afraid about the possibility of iDoc becoming a target of hackers which may lead to mayhem. When one after another, his patients, who were a part of iDoc beta test, begin to die prematurely, he worries that his worst fears have come true. He begins gathering evidence that this app was the reason for all of his patients’ deaths, and decides to expose Amalgamated, the mammoth insurance company which developed the app. But, can a junior doctor fight against a Goliath organisation? Was iDoc the reason behind his patients’ death? Was the app hacked? With billions of dollars involved, many would die or kill to ensure the app’s success.

Robin Cook has used a fresh and easily understandable concept and turned Cell it into a great plot. The theme isn’t too unbelievable either. With the advancement in mobile technology and development of apps for even the minutest of jobs, it is not too far in time that we may actually see an iDoc in the market.

After reading books like Coma, Marker, Outbreak, Fever and Contagion, it is not too much to expect a master thriller from Robin Cook. Unfortunately, like many of his recent books, Cook couldn’t do justice to this well deserving plot probably because of the limitations of the subject. He nailed the climax though proving yet again that a stirring climax can add life to an average book.

Thriller fans must definitely read this Cell, a classic medical thriller by Robin Cook with a new and intriguing plot.