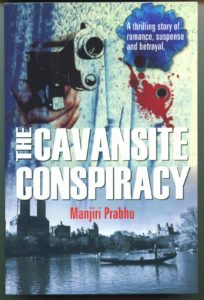 The title of The Cavansite Conspiracy is so catchy that you can’t just ignore it when you come across it.

The blurb is exciting too and talks about a fast-paced thriller surrounding the theft of a rare-mineral stone – Cavansite.

But the book fails to deliver what it promises in terms of the story and the characters. The plot is nowhere as exciting as the title makes it sound.

The story revolves around the theft of a rare-mineral stone, Cavansite, from a Pune based museum.

Koyal Karnink, a lecturer working in Hamburg, is on a visit to Pune to attend her best friend Jasraj’s wedding. But before the wedding takes place, Jasraj is brutally murdered and all initial clues indicate that Koyal is the murderer.

Koyal knows that she has been falsely framed and hence she runs off with her ex-boyfriend Neel to try and prove her innocence.

They learn that it was Jasraj who had stolen the Cavansite and then murdered as a consequence.

Incidentally, all these events are similar to the plot of one by Chris Carver.

The search for the Cavansite and Jasraj’s murderer takes Koyal and Neel to Hamburg, Isle of Sylt and London. What they uncover there is shocking and beyond their imagination.

The rest of the story is how Koyal proves her innocence, uncovers the identity of the murderer and restores the Cavansite to the museum.

Though the plot is interesting, the way in which it is written is very very boring.

Most of the story is about Koyal remembering her past with Neel and feeling sorry about it. After each small dialogue between Koyal and Neel, there are 2-3 very boring paragraphs in which Koyal travels back in time and remembers similar things happening between them.

These, I feel, were written just to add pages to the book. More focus on the actual plot would have been better.

Reading about the emotions and inner turmoil of a girl in a thriller novel is not very exciting and something which I prefer to skip.

As S.V. Divvaakar says in “Beaten by Bhagat”, “This book was a definite page-turner. You turn the pages to avoid reading them”.

The manner in which the mystery unfolds is very haphazard and quick.

Before you know it, the villains are caught, the heroes win and the Cavansite is restored.

The characters are another lull. Not a single character was interesting.

The author tried very hard to portray Neel like a ‘Greek God’ and a typical Bollywood macho man but failed in the attempt.

Koyal is not a character I’d expect to be the protagonist of a thriller novel. Jasraj’s character – dull. The religious group which wants to possess the Cavansite – dull.

Don’t expect too much from the characters in the book. The book, in the end, will prove disappointing.

A final word – In spite of the interesting title and blurb, the book fails miserably in terms of the most important thing – the plot.