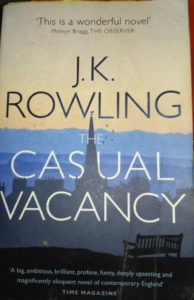 The Casual Vacancy is a 2012 novel written by the renowned British author J.K. Rowling. This is her first novel after her bestseller series Harry Potter. It is also her first novel on adult readership.

The book is set in a fictitious English town called Pagford.

It begins with the death of Pagford’s Parish Councilor Barry Fairbrother. His unexpected death results in a Casual Vacancy which calls for an immediate election, the outcome of which will decide the fate of the local council estate “Fields”, a rundown sink estate.

A man with a very generous spirit, Barry, had been opposed to reassigning Fields to Yarvil, a local council estate, thereby off-loading responsibility for its drug-addled inhabitants, and driving them out of the catchment area for Pagford’s nice primary school.

Now that Barry is dead, many factions develop, concerning whether Fields should remain a part of Pagford or Yarvil.

The lives of those in Pagford’s two estates are so distant from each other that they don’t realize the responsibility they have towards each other.

A series of shocking events follow as the various applicants for the post soon find their dark secrets revealed through the Parish’s online portal, generating waves of disbelief and alarm throughout the city. While they take the wind of the sails for some people, they offer means of secret satisfaction to some.

Rowling unveils a range of social issues like drug addiction, domestic abuse, rape, racism, child abuse, self-harm and suicide that plague our society and the seemingly idyllic small town of Pagford too.

The Casual Vacancy is well-plotted and efficiently organized beneath its eventful surface.

As in her other books, Rowling weaves remarkably vivid characters so the readers are forced to expand their minds and see beyond their personal experiences through them.

She explores the teenage characters of Andrew, Fats and Krystal extremely well and really gets under their skin. The book sends out a righteous social message about responsibility towards others.

The Casual Vacancy is certainly a good book, but readers shouldn’t expect the Harry Potter-like magic spell to be cast over them again.

The author doesn’t focus much on her writing style, the language seems to be stereotyped and the book loses flow at various points.

After a certain point, the plot becomes predictable; Rowling tries to fabricate it but a keen reader will see past it.

She has tried to put forward a very admirable sentiment through this novel which is the need for empathy and social responsibility towards our fellow humans who are not as blessed as us.

All in all, The Casual Vacancy isn’t a masterpiece like her previous work, but it echoes sentiments that will resonate through the minds of the readers as the story unfolds and its characters and their emotions transcend the pages.