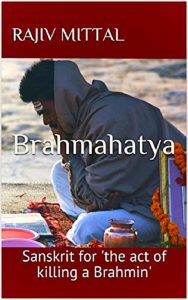 Brahmahatya in Sanskrit means “the act of killing a Brahmin”. Most part of the book revolves around the theme of Brahmahatya and its consequences. The title is quite apt for the book and is intriguing enough to invoke the reader’s interest.

What is the story all about?

Ravi Narasimha is a middle-aged bachelor who is filled with guilt at the death of his father. His father was refused admission at an elderly care home by a stubborn and unreasonable Dr. Chari who is the very definition of anti-social. Unable to take his father with him to Dubai and unable to arrange an accommodation at the prestigious GMR Residency, Ravi had no choice but to leave him with a rather unknown and dubious looking old age home.

It is there that his father dies from neglect, and it is then that Ravi swears to revenge the man who killed his father. On the other hand, Bhavna is a woman who has suffered too but not in the same way as Ravi. A meticulous taskmaster and a single mom, she soon discovers that Ravi is impersonating his father and living in the GMR residency but to what end? The answers to all their actions and inactions lie in the wisdom of the sacred verses of Hindu scriptures. Brahmahatya is after all the evilest of all crimes and to commit it is to bring “Naraka” upon oneself.

At the beginning, the book seems like a really interesting one. There is a different kind of story being told and a very different theme explored here. It is enough to keep the reader’s interest on. The theme of abandonment from the father’s point of view and the theme of guilt and helplessness from the son’s point of view is something which is interesting and refreshing to read about. The descriptions of the workings of an old age home and life inside it are also things that caught my interest.

Despite a brilliant start, the story slows down in the middle. There was a kind of monotony which I didn’t like as I turned pages after pages. Just like the life of the GMR dwellers, the book too seemed too gloomy and dull, especially towards the middle. The plot moves slowly and the characters too assume monotony in their lives. This is turn disappointed the reader in me and this is where I wanted to put the book down. But nevertheless, I struggled on.

In the end, the story of Brahmahatya picks pace again and things move fast and in tandem. Characters assume their rightful roles and start doing what in my opinion they should have done long back. The climax was a bit different though. In a way, it was befitting but there were certain loose ends which left many questions unanswered.

The narration had too much “quoting from mythology” style of writing which initially was interesting but as time went by, turned to be a big turn off. I often found myself skipping the lengthy Sanskrit phrases. I just think it was a bit overdone. I also did not like the cover of the book. It was unappealing and distasteful. Further, I was a bit disappointed towards the end because there were some loose ends in the plot.

Overall, reading the book was a pleasure not because it was a fast-paced and entertaining read. If I am completely honest with you, there were moments when the book seemed too dull and monotonous but in the end, it was a good story and a good piece of fiction. That being said, I would recommend this book to a very niche category of readers – basically people who enjoy mythology and slow-paced stories or people who have a decent knowledge of our scriptures.

Buy your copy at the link below!