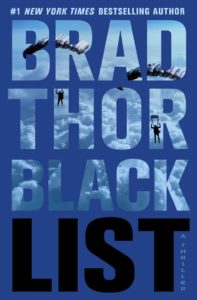 Edward Snowden was in the news recently for disclosing top-secret US surveillance programs to the media. These expose, which gave accounts of the extent to which the federal agencies eavesdropped on private conversations and social interactions, came as a shock to the US citizens and proponents of privacy. The government, any day, can justify these acts in the name of national security but a boundary needs to be drawn. If these conducts of the government and the related agencies are left unchecked, it would release a monster, too hard to control. This sensitive issue is the basis of Brad Thor’s latest book Black List.

Scot Harvath is a field agent in the Carlton Group, a private arm of the CIA. During a mission in Italy, his safe-house is compromised, he is attacked and his partner is killed. When all his attempts to contact his boss and colleagues at Carlton go unanswered, he construes a conspiracy at the highest levels and goes underground. Subsequently, he is contacted by Nicholas, a computer wizard and a colleague. Nicholas is in possession of a data drive handed to him by Caroline Romero, an employee at Adaptive Technology Solutions, who died under mysterious circumstances. The alarming contents of the drive and the serious implications it might have on the United States and its future forms the rest of the story. What makes the book intriguing is the cat-and-mouse game between Harvath and Craig Middleton, a shrewd man who single-handedly runs the ATS.

“He was a handsome man in his early forties and carried himself with an unmistakable bearing that, to the uninitiated, simply appeared to reflect relaxed self-confidence. The initiated, on the other hand, noticed how he took in his surroundings, how he was aware of everything and everyone without appearing to be paying particular attention to anything.”

It is very easy to say that we’ve liked or disliked a book but justifying that judgement is a tough task. There are many alien and mysterious factors involved. Reviewing becomes easiest when we are clearly able to picturise the plot or relate to the characters. The reason why I loved Black List is that it has a solid plot – no loopholes, no unnecessary sub-plots and no unrelated characters. All the pages have a punch and add to the story. Harvath’s is one of the very few fictional characters I truly enjoyed reading. An elite soldier and the master strategist, his character is something to reckon. I’d love to see this combination of a solid plot and a strong protagonist in all the thrillers that I read.

All mysteries and thrillers are enjoyable and decent but only a few of them leave a mark and leave you craving for more. Black List is one of those rare works of fiction which will stay on my favourite picks for a long time. This is a book I would recommend to others and will not easily forget because it is so close to the truth.