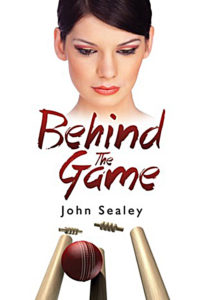 In India, cricket is a religion. When team India plays, one billion pairs of eyes watch. Even when the game ends, it is discussed for days in village centres, office cubicles, college canteens, school buses and even in kitty parties. We consider ourselves the biggest experts of the game and have a hundred opinions on why the team lost, and a thousand strategies to win the next game. But very few of us actually know about the rot which hides behind all this dazzle and glitter; there is a tonne of money involved, many big egos fight to rule the limited space, and thousands have their dreams shattered every year which, if exposed, will bust the allure surrounding the game.

John Sealey’s “Behind the Game” is all about this, and more. It is the story which revolves around the game of cricket and exposes the envy, pride, back-stabbing, politics, and addiction which goes together with the game.

Tony de Silva, India’s greatest cricketer India, retires at the height of his career. All he plans to do is settle down and relax, that is until he meets Leya Raman, a strikingly beautiful woman, and the owner of a successful financial management company. Leya falls in love with Tony, but he has eyes only for her sister, Karma. Dejected and distraught, she swears revenge. Unable to stay away from the game, Tony starts a sports management company where he ropes in promising young cricketers and coaches them. Leya does all she can to destroy him and his company with the help of a wily lawyer and a local gangster. Will Tony fight back to keep his dream company alive? Will Leya fall prey to her own misdeeds? Who will Karma support – her love or her family?

“In the changing rooms the adrenaline was beginning to build, for like all those about to enter the arena, there was a feeling of trepidation, as in ancient times when gladiators walked out into the arena, not knowing whether it would be for the last time. Tony de Silva would not be walking out into the arena to die, but he would certainly be walking out for the last time. He was about to retire, and this would be his last match.”

The plot of “Behind the Game” is simple yet captivating; it progresses steadily and is an easy read. It gives a detailed account of what actually happens in the game of cricket. The nitty-gritty of the betting and match-fixing industry is explained in detail. The manner in which name and fame change the character of a person is well brought out. A minor disappointment while reading was that most of the characters have English names though they are Indian, which is a bit conflicting. A few Indian names peppered in would have done the job. But the character build-up and their portrayal do justice to the sound plot.

Do give your feedback about the review/book in the comments below.