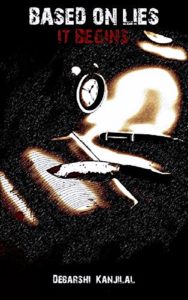 Novellas are sometimes so much more fun than a novel. This is especially true when they manage to tell a gripping story in such a short span of time. Based on Lies: It Begins by Debarshi Kanjilal is the part one of a two-part novella series which tells us an unbelievably wicked story.

The book traces the story of the protagonist Anurag Sanyal who lives in Calcutta. Based on Lies: It Begins is narrated in the form of a diary in which the protagonist records his thoughts. He starts with the marital discord which has slowly settled in his and his wife Aditi’s life. What basically starts as a vent out of thoughts turns into something very dark and sinister when page by page, Anurag reveals his past.  It starts as an innocent diary but soon becomes a journal of his twisted crimes.

As he continues to write, readers learn that both Aditi and Anurag have been keeping secrets – a lot of them. In this book however, Anurag’s secrets take the limelight and are revealed one by one.  Anurag who comes off as a seemingly innocuous person slowly morphs into a twisted being. What essentially starts as a mundane diary in the end becomes a proof of crime, but will it be made use of?

The language and format

The narration is eloquent. The language is uncomplicated yet good. Also, the absence of editing errors helps in retaining the reader’s interest. The story is told in the form of a diary and each chapter reflects a single entry.

There is a huge cast of characters all of which have some link or the other to Anurag and Aditi’s past. Further, they themselves have varying shades of grey in them. So, we have a young boy who is looking for ways to kill, a teenager who is trying to seduce her mother’s boyfriend, a step daughter who is seeking revenge, a killer in hiding, a psychotic girlfriend etc. Almost all characters are psychotic – only the degree varies.

Since the book is the part one of a two-part novella series, the story remains untold. Whatever has been disclosed though, makes sure that there is no way a reader would like to miss the part 2. Anurag’s story as told by his diary is what is disclosed in this part and now the ball has been thrown into Aditi’s court. It will be upon Aditi to decide what to do with the diary and disclose her story in her own words. Only one thing remains assured – her story will be as gripping and sinister as Anurag’s.

Overall, the book is a perfect read for somebody in mood for entertainment. The writing is fantastic and teases the reader throughout the course of the book. I will definitely recommend Based on Lies: It Begins to all fiction lovers.

Pick the book if

Pick the book if you like – thrillers, murder mysteries, psychological thrillers, and medium paced entertaining reads. Also, if you like short reads and novellas, this book is an ideal one.

Skip the book only if psychological thrillers don’t excite you.

Can’t wait to read it? Buy your copy of Based on Lies: It Begins from the link below.