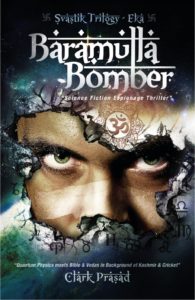 Spy thrillers are perhaps the most popular genres among people who are voracious readers. There is nothing like a good spy thriller to get your adrenaline flowing.

In fact, most of my childhood has been spent reading spy thrillers, courtesy the works of Robert Ludlum.

Whether it was a Jason Bourne or a Brandon Scofield, they were characters and stories that were enthralling and memorable to its readers.

Rarely have I come across an Indian author who has taken up writing an espionage thriller. Perhaps it is because of the fact that there is not too much information regarding our security agencies when compared to the CIA or other such international agencies.

Therefore, it was a pleasant surprise when I came across Clark Prasad’s “Baramulla Bomber”, which is, as advertised beneath the title, a science fiction espionage thriller.

It is part one of the Svastik Trilogy and deals with a combination of multiple subjects like Quantum Physics, the Vedas and even Cricket! The story starts with a meeting of different royal descendants, a group known as the Cho Skyong.

While the group discusses various events in the world as well as the Haider family, a blast rips apart and wipes out most of the group. However, Abhimanyu Kashyap drags himself out alive and promises to keep the secret alive.

With this prologue, the stage of Baramulla Bomber is set for a riveting set of events in which Mansur Haider and Adolf Silfverskiold play a significant role.

Haider is a Kashmiri youngster with dreams of playing for the Indian cricket team whereas Adolf is a Swedish secret agent in search of answers regarding his predecessor’s death.

There are other major characters, including India’s Home Minister, who are involved in an extensive plot that could destroy the country and leave the world in a war-like situation.

There have been many books in which the plot lacks conviction as it is mostly superficial and does not explore to a greater depth. But that is not the case with Baramulla Bomber.

There is indeed a lot of intensity in the plot and makes you want to continue turning the pages to see where it all ends.

While there are a lot of characters in the book, everyone is given ample time, ensuring that no character is wasted, including a brief appearance from an air hostess!

Just as no book can be perfect, there are a few flaws that the author may want to rectify in books 2 and 3.

For example, the entire story was loose, in the sense that it wasn’t as gripping as a good plot as the Baramulla Bomber would have deserved.

Also, the reader would become a little impatient with the number of images that are there in the book. While initially it was innovative and helped the reader understand where the particular event was occurring, having it at the beginning of every chapter was a bit too much.

Even the dialogues could have been a bit more memorable and could have certainly done without the extensive use of the ellipsis.

But otherwise, the book is a very good read and it would be a refreshing change to what one would find in the Indian book’s scene.