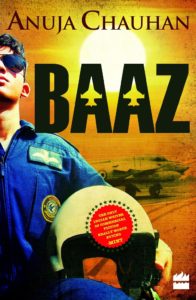 Anuja Chauhan needs no introductions. She has been rightly hailed as the best writer of commercial fiction in India. Her signature writing is characterized by a unique plot, awesome characters and loads and tons of entertainment. It is highly likely thus, that her books create the magic that they do.

Baaz is the story of a young charismatic Flying Officer Ishaan Fauzdaar; Shaanu to his near and dear ones and Baaz to his colleagues and friends. He hails from a small village called Chakkahera in Haryana and though he is quite good at English, he involuntarily switches back to Haryanvi in moments of passion and pain. Ishaan is every bit suave and macho and has girls swooning over him all the time but being the simple boy that he is, he is waiting for his “someone special”.

Young Tehmina Dadyseth is not a girl whom guys would love to take home to their mothers. She is independent, strong willed, highly opinionated and has modeled in a skimpy bikini under a waterfall promoting a foreign brand of soap. While these characterizes definitely make her attractive to the opposite sex, they will never make her qualify for the role of an “ideal Indian wife”.

Ishaan is different though. Even when Tehmina repeatedly and unashamedly says that she hates war and everything that concerns war, Ishaan is determined to woo her. So Baaz is basically the story of Tehmina and Ishaan, more of Ishaan than Tehmina and to know more than this, you will have to read the book yourself. I refrain from divulging anymore for the sake of spoilers.

The plot of the book is excellent. It is set in the war-torn year of 1971 when Bangladesh was on the brink of independence and was being helped by India in its efforts against the biased regime of West Pakistan. The plot is neither too complicated nor too simple. In fact, it is perfectly balanced between these two extremes.

The characters steal the show. Ishaan is a character who will woo your heart and stay with you long after you are done reading the book. If you are a girl, you are surely going to fall in love with him. For even though he is a bit cocky and just an extra bit flamboyant, he is a sweetheart and the made of stuff that dreams are made of. Tehmina is definitely one lucky girl for sure! Other characters too are equally enthralling. I particularly liked the typical Jat-ness of Chaudhari Chimman Singh Fauzdaar. He is a character who amused and repelled me at the same time.

Ishaan’s friend squad which comprises of Raka, Maddy and Juhi is also interesting enough to give you some serious friendship goals. Anuja has a way with her words. All her characters are just so dynamic and larger than life that you can very well visualize them in front of you. Even the less important characters of Kainaz Dadyseth, Macho Da, General Nikka Khan etc were so descriptive and lively. It will be heartbreaking if this book is not turned into a movie.

Anuja writes in her signature style. Baaz is written in a third person narrative. It takes the reader across the breadth of India from Chakkahera in Haryana to Kalaiganga in West Bengal to Dacca in Bangladesh. Her writing is equal parts witty and serious. It is definitely very entertaining and that is what makes this book such a page-turner of a read. The story moves at a steady pace throughout the book and not one of those four hundred odd pages seem dull or out of place. Her ability to bring about the Indian-ness of her characters with the use of Indianized English is commendable. This makes her characters all the more relevant and relatable to the reader.

In this book, in particular, her writing makes the India-Pakistan War of 1971 come alive to the reader. I also liked the fact that she has included a section called A Note on Historical Accuracy towards the end of the book. That a lot of research has gone into writing Baaz, is evident from the Acknowledgements section at the end where Anuja has profusely thanked the many people whom she had consulted for this book.

I simply do not want to comment much on the climax for the fear of spilling the beans. The climax is part predictable and part unpredictable. It is safe to say that that unlike her other novels this one has a more serious end. Though the climax was good I was a bit disappointed for reasons that I cannot mention.

Baaz is an absolute entertainer and that is what makes it such a winner. People who have enjoyed Anuja’s earlier works may find it a little different but that should give them all the more reason to read this book.

Final Verdict – Baaz by Anuja Chauhan is definitely worthy of 5 stars and hence I recommend it to all fiction readers.

Buy your copy from the link below.