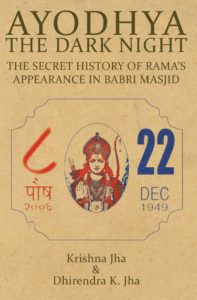 If I was to decide on 5 events that have influenced Modern day India, the “Babri Masjid demolition” would certainly feature on that list. On 6th December 1992, the structure was demolished by Karsevaks and this site has been under religious pressure since then. To millions of Hindus in India and elsewhere, this is a sacred site and they identify it with Lord Shri Ram. To the Muslims of Ayodhya, this was a mosque where they once went for Namaaz. Keeping in view the religious sentiments of the people and the delicate secular fabric, the Allahabad High Court pronounced an order on 30th September 2010 dividing the Ayodhya land equally between Hindu Maha Sabha, Sunni Waqf Board & Nirmohi Akhara.

I had always believed that, indeed, idols of Lord Ram, Hanuman & Sita were found inside the Babri Masjid compound; that, indeed, it was an old Ram temple, destroyed by Mir Baki Khan, Babur’s General, to build the Babri Masjid. If you all too believe these facts, read Ayodhya The Dark Night; it’ll make you think again. You will come face to face with such facts which you were never told about, never read in your History books and never knew they existed.

Ayodhya The Dark Night by Krishna Jha & Dhirendra K. Jha takes you to the night of 22nd December 1949. A single event that night – placing Ram idols in the Babri Masjid – has changed the course of Modern Indian History. The authors have done a very elaborate research and written about a huge conspiracy involving “people in power” of those times who had used the Ayodhya Sentiment for their own political gains. You will come across many famous names like Jawaharlal Nehru, Vallabhbhai Patel & Govind Ballabh Pant. You will learn about many unknown names like Abhiram Das, Gopal Visharad, Baba Raghav Das, Guru Datt Singh & Digvijay Nath.

The book explains in detail the events leading up to the night of 22nd December 1949. The lives of the people involved in the conspiracy has been extensively researched. The events have been described thoroughly using first-hand accounts, Newspaper recordings & Judicial archives. The events of that fateful night have been covered in extensive detail, including the story of the Maulvi who was in the mosque, the guard who was on night patrol, the events inside Babri Masjid once the conspirators were inside and the events of the following morning.

Ayodhya The Dark Night also explains in detail the events that followed. These facts will put all Indians, who believe ours’ is a secular state, to shame. The plight of Muslims in U.P in general and Ayodhya, in particular, made my heart ache. The authors write about a lone man, Akshay Brahmachari, and his fight against the Ayodhya conspiracy and to my utter surprise, I realised that I had never heard about him before. It’s true that history is written by the winners, even today.

This book is a must read for all Indians who want to know the true events behind the Babri Masjid demolition and about other facts like,

“Who planted the Ram idol inside the Babri Masjid?”

“Who were the real conspirators?”

“What was the reason behind planting the idols?”

“The Akharas and their history”