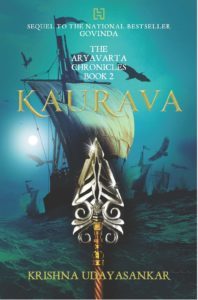 When I finished reading “Govinda”, book 1 of The Aryavarta Chronicles, I couldn’t wait to begin the 2nd book – The Aryavarta Chronicles #2: Kaurava! The re-telling of the Mahabharata was excellently done by Ms. Krishna Udayashankar, and “Govinda” was a very enjoyable read. Of course, if you are still looking to find that the kings back then were really gods, you will be sorely disappointed. This trilogy is more realistic and treats the kings and queens as human beings, everyone has their strengths and their failings. And this is exactly what makes The Aryavarta Chronicles a fascinating read.

Usually, the 2nd part of any trilogy is like a distraction that one needs to bear to reach the much-anticipated climax. It is only there to run the story forward, and it has neither the surprise element of part 1 nor the anticipation when reading the final part. It is a go-between that is always a challenge for authors that are putting forward a story arch over 3 books. But Krishna Udayashankar did a fabulous job in ensuring that no part of the excitement of Book 1 is lost in Book 2. In fact, one might go on to say that The Aryavarta Chronicles #2: Kaurava was even better than “Govinda”!

The story continues from where “Govinda” ended, but this time, the focus is more on the Kauravas, especially Syoddhan and Yudhistir. The characterization is once again fantastic, with none of the characters coming out like larger than life heroes that can do no wrong. Everyone has their own flaws and how they tackle the various situations. The story is mainly about the various political moves from the different kings in the empire, attempting to bring down Dwaraka and Indraprastha. The way the attack on described on Dwaraka will leave you with awe.

But truly, most readers would agree, the epic part of the book is the scene where Dharma loses his kingdom in a gambling game. While we are used to reading that Dharma was tricked into losing his kingdom, we get a different spin from the author, and one gets the feeling that it is most likely what would have happened, bring the human element into the picture. The characters of Govinda Shauri and Panchali continue to play a major part in the events, and I was especially impressed with the way the character of Panchali is treated.

Overall, The Aryavarta Chronicles #2: Kaurava is a fitting continuation for “Govinda”, and while it does start a bit slow, it was important to make sure that this was so as the pace increases continuously throughout the book. With the background on the Firewrights forming an important part of the story, sometimes it becomes difficult to keep track of the story. However, on the whole, it is yet another fantastic effort from Krishna Udayashankar, and I for one, cannot wait for book 3 “Kurukshetra” to come out!