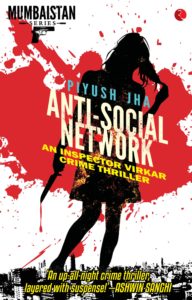 April 29, 2014 – Man posts woman’s obscene photo on facebook, jailed for 3 years. June 6, 2014 – Husband held for posting his wife’s video on a porn site. June 23, 2014 – Man arrested for posting offensive pictures on facebook. July 9, 2014 – Man cheated of Rs. 29 lakh by cybercriminals. These are just a few of the cybercrimes which have made it to the news. Many more go ignored and unreported. In the last one year, cybercrime has gone up by 51% in India; this is more than any other crime. Piyush Jha’s “Anti-Social Network” is the second in Inspector Virkar crime thriller series, and is based on cybercrime in Mumbai.

When a student is found gruesomely murdered, Inspector Virkar of crime branch is called in to investigate the case. Before anyone realises, few other students are found similarly murdered across Mumbai. As he investigates, he stumbles across the ‘Anti-Social Network’, a gang of young hackers whose modus operandi is to illegally access compromising photos of naïve people and then extort money by blackmailing them. As soon as Virkar sees a link between the murders and the anti-social network and investigates further, the group trains its sights on him. Though Virkar is an investigator a la par the best, he is always outsmarted by the killer because of his computer-illiteracy, and this case becomes Virkar’s toughest case yet. Who is the mastermind behind this hacker group? What is the link between the killings and the group?

Piyush Jha never fails to surprise me. His books are written in pure Bollywood masala style, and are equally entertaining. The twists and turns you encounter along the plot will leave you spellbound, and the climax only gets better. Though the language is not a bibliophile’s delight, it suits the plot perfectly and makes for an interesting narration. The characters too, though filmy, are very interesting. Piyush Jha’s Virkar is India’s answer to James Patterson’s Michael Bennett; a crafty, smart and fearless cop. Fans of crime thrillers and mysteries will definitely love this book.

Do you think more books should be written on cybercrime in India? Do let us know in the comments below.