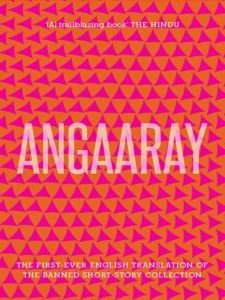 Originally written in the Urdu language, and first published in 1932, “Angaaray” was immediately banned when it created outrage amongst the colonial British and conservative Islamists.

The extent to which it infuriated the Muslim community was very aptly denoted by its title “Angaaray” which translates to “burning coals” in the English language.

The British, acting at the behest of the Muslim community, burned all but five copies which were then shipped off to England.

Years later, the copies were retrieved from the British archives and then published but not before many years had passed.

Now, the book has been translated into English and is all out to grab the attention of the media and public alike.

The book is a collection of short stories penned by writers Sajjad Zaheer, Ahmed Ali, Rashid Jahan and Mahmud-uz-Zafar who gave an insider’s account of the then prevailing issues and problems within the Muslim society which, at that time, was allegedly unfavourably balanced towards rituals than the actual religion and with most of it adversely affecting the female gender.

After many years of conservative and classical Urdu texts and literature, the collection was like a fresh breath of air for the Urdu literature and something which eventually led to the formation of the All India Progressive Writers Association (called the Akhil Bharatiya Pragatisheel Lekhak Sangh in Hindi and the Anjuman Taraqqi Pasand Mussanafin-e-Hind in Urdu).

“Angaaray”, even to this date, has certain statements and sentences which if highlighted can cause furore again.

My favourite story in the collection was “Dulari” for it very aptly portrays what happens to many orphan or poor girls born and brought up in the care of rich families.

I also liked Rashid Jahan’s story and her play. They were indeed relatable and helped understand what the women at that time were going through.

Much to my surprise, they have many elements which still persist in today’s society and thus are quite contemporary in nature.

The stories are short and concise and the theme of the book is maintained in all stories. The book put together in those conventional days must have been a real tough job.

I liked the way the translator has done a good job of bringing to the forefront the rich history which the book has and also the way in which he has briefly introduced the life and times of all four authors.

This really helps the reader to manoeuvre his way through the text in an easy way. The text is further enriched with the help of various archives of newspapers, press clippings, government documents and notices which revolve around the book.

If looked at from a historical point of view, “Angaaray” has indeed a lot of importance and thus I would recommend it to all history lovers.

Additionally, it will also make a good read for those who have an interest in Urdu literature. That being said, I rate the book four out of five stars.