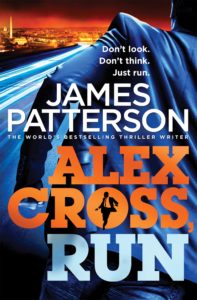 This is the third book of James Patterson that I am reviewing on BookGeeks.in, the first two being – “Worst Case” and “Postcard Killers”. James Patterson writes different series – “Women’s Murder Club”, “Alex Cross”, “Michael Bennett”, “Daniel X” and “Maximum Ride” among others. I wanted to have a taste of all these different series before immersing myself completely into any one. Of the three books that I have tried, involving three different protagonists, I must say, Alex Cross surely gets my vote.

The story starts with a murder in a peaceful D.C. neighbourhood. Slowly, one after another, the bodies keep piling up. Alex Cross, a cop in the Metropolitan Police Department, is in charge of the investigations. His investigations reveal that not one but three different serial killers are on the prowl for innocent victims. The first killer, the “River Killer”, kills young boys; the second killer, the “Barbie Killer”, kills blonds; and the third killer, “Russell”, kills pregnant women. As Cross digs deeper into the case, he realises that one of the killers is killing for revenge and the target is he himself. Meanwhile, there is a problem at Cross’s home involving a foster child, who plays an important part in the plot. Many foreseeable and predictable events occur – Cross is framed for working under influence, his actions during the investigations are questioned, he is accused of manhandling and is arrested & suspended. But, as any hero would, Cross too proves his innocence, solves the murders and emerges a winner – battered and bruised. The end of Russell’s character in the plot is very abrupt and could have been more interesting. Other than that, the plot and the climax are flawless and interesting.

As I have mentioned before, the character of Alex Cross is awesome. This being my first Alex Cross book, I cannot give you much insight into his character but I would certainly say that once you read this book, Cross’s character will entice you to read more of his books. Cross has a perfect family – a lovely wife, who is a cop herself; two kids from a previous marriage; a great grandmother and a troubled foster child who is in line for adoption. The characters of the three serial killers are superbly built. Their psychotic tendencies, sick desires and killing techniques are described in great detail and you would want to kill them yourself.

The best thing about Patterson’s novels is that any book is divided into more than a 100 chapters, 2-3 pages each. It makes the reading easier and exciting. The ending of each of this chapter leaves you in awe and wanting to go on. So, there are 100 different breath-taking situations in any Patterson novel which will never bore you or allow you to put the book down.

I would strongly recommend this as a MUST READ. Read the book to know –

“The identity of the killers.”

“What revenge is one of the killers seeking from Cross?”

“What happens to Cross’s foster child?”

“Can Cross protect his family?”