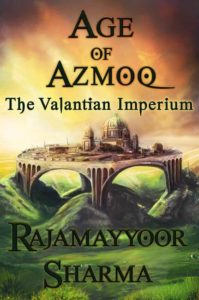 A thick book, a new universe, a mystery on the back cover: a treat in every way. The rampant increase in the popularity of dystopian and fantasy-based novels has paved the way for a much broader acceptance in the reading populace for this genre. It has made us open to new ideas, new universes and a new point of view to fiction.

Dystopia is no new concept. Orwell’s 1984 treated fiction with its dark dystopia decades before Hunger Games did. However, this past decade has witnessed more dystopian fiction than one can possibly read – or like. There is no more novelty in this genre. There is, in fact, a fair bit of speculation. To write a good dystopia, you really have to stand out. Was Age of Azmoq able to – at least, for me? Let’s have a look.

I don’t read dystopian fiction a lot. I only read the book that hit the bestseller list, so that I can be sure of the quality. With Age of Azmoq, I had no previous references. I started reading the book with an open mind.

The first thing that struck positive was the writing. The writing is pretty much the make-or-break in any genre. In Age of Azmoq, the writing was simple, comprehensive, interactive. I would go so far as to say it was the ideal kind of writing I look for in dystopian or science fictions: perfectly explanatory (to a layman like me) but also lively.

The same sort of writing carries on throughout the book, and it also succeeds in adapting itself to the different parts of the book. It is mellow where it needs to be, and fast-paced where it should be – like during the climax. The only complaint that I perhaps have from the writing is that the dialogues were quite unrealistic at times. Plain distracting, at some points. Though the role of each character was well placed, their dialogues seemed out of place to a reader.

I would also like to talk about a broader purpose of the writing of the book. Apart from being simple and enjoyable to read, it should also be able to convey a general idea of the plot as you go along reading the book.

Age of Azmoq started with a map of the continent of “Valentia”. It then pointed out the countries and the capital cities. This is obviously an entirely fictitious world with little to do with the real world. In these cases, the author needs to start from scratch and build the world up for us to imagine.

In Age of Azmoq, Rajamayyoor Sharma gave very little information about how the characters looked. There was great detail about the creatures and the land, but little about the characters themselves. In the beginning, I did not know how the main character looked, his age, or anything else about him. Since the book is in the first person, a reader needs to know enough about the protagonist to understand the book from his point of view. I simply assumed that the character has a human-like appearance.

Even if it is the right assumption, I shouldn’t have to assume in the first place. A dystopian fiction should leave nothing to your imagination. This kind of a book will only have completely succeeded if the reader can imagine the world just as the author did. For this, the author needs to describe – and describe meaningfully. I will not take this away from the writing. The descriptions mentioned were simple and useful.

Though the book was boring in the beginning, it picked up the pace. It is, as I mentioned, necessary to bore the reader with important details in the beginning. I don’t blame the author. However, when the book moved from the details and got to the happenings in the lives of the characters, it still moved slowly.

The story moves forward with the journey of Dev, who aims to avenge the death of his parents. We see a lot of stories shaping out to be this way: where the protagonist is a newbie yet spirited, with the fire of vindication burning in his heart. This puts just as much pressure into authors to make their story stand out. In Age of Azmoq, the author Rajmayoor Sharma shows his own take on this common plot point. I’m afraid revealing the outcome of this journey would be a disservice to this author because personally, I would recommend reading it.

Another favourite about this book is definitely the narrative. The entire plot is narrated as a play-by-play that Dev gives to his friends. The narrative is filled with Dev’s own remarks and questions at frequent points which does make it more interesting. The names in the entire story are amply creative, a few like Rudra and Dev prove themselves to be my favourite only because of the Indian connotation to them. Surely even a neutral review can afford a little bias!

As the journey continues, the book became a difficult read for a layman like me. As I mentioned, it was an impressive book. However, that doesn’t nullify the fact that it’s not a breezy read. The ending is great, provided you keep up with the terminologies, names and the small details. Focus throughout the book and find yourself getting attached to the characters, and the ending will reward you.

All in all, if you’re an admirer of the science fiction or dystopian fiction genre, you will enjoy this book. The writing is neat, simple, enjoyable. For people who find themselves outside those categories, it may turn out to be a stretch. In any case, Age of Azmoq is definitely worth picking up!

Can’t wait to read it? Buy your copy of Age of Azmoq at the link below: