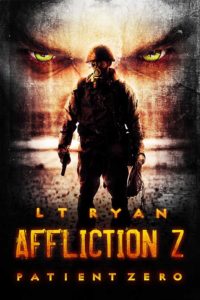 Zombie fiction has become one of my favourite genres, and thus I now find myself reading more and more of the same. “Affliction Z: Patient Zero” is another one of my many reads in this genre. The story is set in Southern Nigeria and starts when a SEAL Team is sent to the region to rescue a 3rd Ranger Battalion Company from there. Sean Ryder is an Air Force Pararescueman and is sent along with the SEAL Team to the mission. But what he doesn’t know is that this can very well be his last mission.

The facility in Nigeria where they are sent has become the home ground for zombies. It was a secret bio-weapon research facility once where an experiment gone wrong changes the fate of hundreds of men over a period of a few days. Thus, what once was a weapon for one nation becomes a dread for the entire humanity.

The things which differentiate this fiction from other such ones are – the different setting (in the jungles of Southern Nigeria), the break does not happen in the first book; it is entirely dedicated to the fighting within the secret facility, after Sean survives the facility he is thoroughly counselled into believing that all that he saw was nothing but hallucinations and he too comes to believe it when the actual widespread breakout happens at the end of the book. Also, some zombies seem to have extra powers and they can jump and run with supernatural speed.

I liked the plot and the story of “Affliction Z: Patient Zero”. The two central characters were also impressive. The end seemed intriguing enough and leaves the reader guessing. There were a few loose ends and few things were left unexplained but I believe that might be because some explanation is planned in the next part. Almost 90% of the plot is based in the facility so there is not much change of location to break the monotony.  I would have enjoyed the book much more if the action was based in other locations too as the fighting within the facility had become quite monotonous and dull by the end.

Overall, the end seemed much more enthralling than the middle part, which also makes me think that the second book will be much more interesting than the first. “Affliction Z: Patient Zero” comes as a decent one time read and will definitely appeal to lovers of zombie fiction. I thus rate the book three and a half stars and recommend it to all my readers.